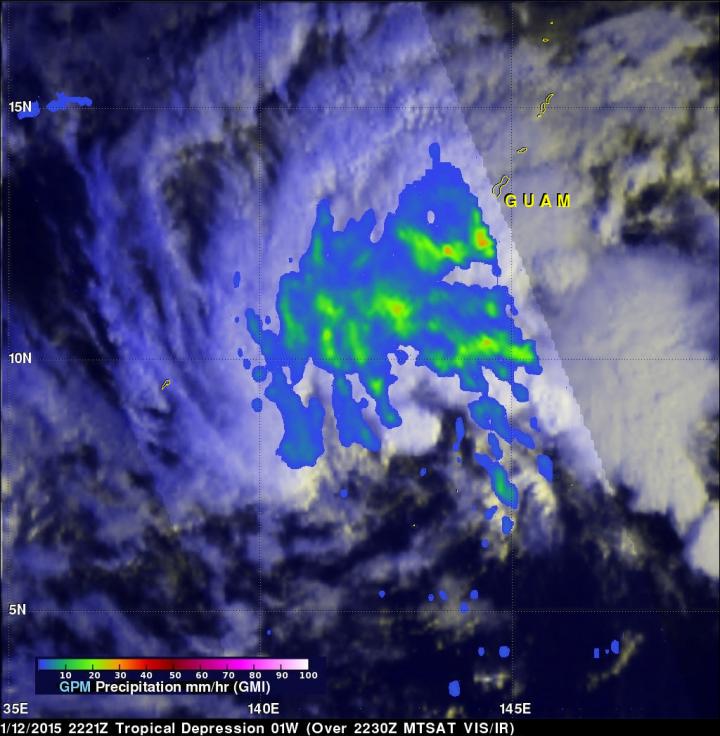 The first tropical depression of the 2015 western Pacific season formed southwest of Guam on January 13 and is predicted to intensify into a tropical storm while headed toward the Philippines. NASA’s TRMM and GPM satellites provided a look at Tropical Depression Mekkhala’s rainfall data that showed the area of moderate rainfall had expanded as the storm strengthened on January 13.

Mekkhala was previously known as Tropical Depression 01W until January 14 when it was renamed.

Both the Global Precipitation Measurement (GPM) core satellite and the Tropical Rainfall Measuring Mission (TRMM) satellite recently had good views of the developing tropical cyclone. Both GPM and TRMM are joint missions with NASA and the Japan Aerospace Exploration Agency.

A rainfall analysis from the TRMM satellite’s Microwave Imager (TMI) is shown using data collected when the satellite flew above on January 13, 2015 at 0556 UTC (12:56 a.m. EST). TMI data showed the circulation around Mekkhala had become slightly better defined since the earlier GPM pass.

The Joint Typhoon Warning Center currently forecasts Mekkhala to approach Visayas, the central Philippines, and then curve north toward Luzon on January 19, while the center skirts the eastern coast of that region.