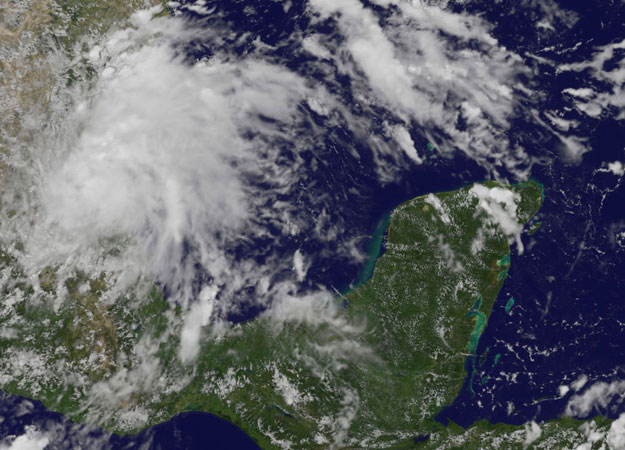 The eighth tropical depression of the Atlantic Ocean hurricane season formed in the southwestern Gulf of Mexico at 2 p.m. EDT on Sept. 6, and NOAA’s GOES-East satellite captured a visible image of the storm.

NOAA’s GOES-East satellite image showed a large circulation associated with Tropical Depression 8 or TD8 after it was officially designated a depression by the National Hurricane Center. The image was created by NASA’s GOES Project at the NASA Goddard Space Flight Center in Greenbelt, Md.

The center of TD8 formed right along the eastern coast of Mexico near Tampico and was making landfall after it formed. At 2:30 p.m. EDT, the center of the depression was directly over Tampico. It had maximum sustained winds near 35 mph/55 kph and was moving to the west-southwest at 6 mph/9 kph. Minimum central pressure is 1009 millibars. Despite making landfall quickly, there are no watches and warnings in effect, although it is expected to drop rainfall between 3 and 5 inches in the Mexican states of Veracruz and Tamaulipas. Some areas may receive isolated maximum amounts up to 10 inches, and could experience flash-flooding and mudslides.

According to the National Hurricane Center, TD8 is going to be short-lived because it is moving over land. In fact, the NHC expects the depression to become a remnant low pressure area over the weekend of Sept. 7 and 8 as it drops more rainfall on its track to the west-southwest.