By SpaceRef Editor
August 6, 2009
Filed under Asteroids and Comets, Jet Propulsion Laboratory, US

Radar imaging at NASA’s Goldstone Solar System Radar on June 12 and 14, 2009, revealed that near-Earth asteroid 1994 CC is a triple system. Asteroid 1994 CC encountered Earth within 2.52 million kilometers (1.56 million miles) on June 10. Prior to the flyby, very little was known about this celestial body. 1994 CC is only the second triple system known in the near-Earth population. A team led by Marina Brozovic and Lance Benner, both scientists at NASA’s Jet Propulsion Laboratory in Pasadena, Calif., made the discovery. 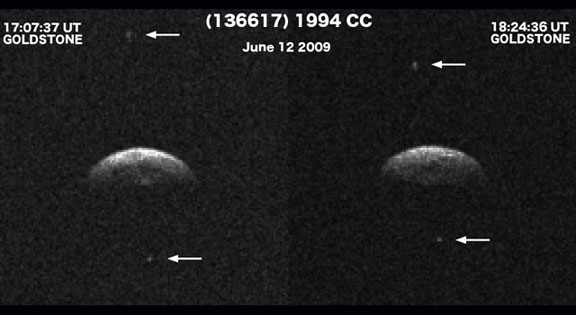 1994 CC consists of a central object about 700 meters (2,300 feet) in diameter that has two smaller moons revolving around it. Preliminary analysis suggests that the two small satellites are at least 50 meters (164 feet) in diameter. Radar observations at Arecibo Observatory in Puerto Rico, led by the center’s director Mike Nolan, also detected all three objects, and the combined observations from Goldstone and Arecibo will be utilized by JPL scientists and their colleagues to study 1994 CC’s orbital and physical properties.

The next comparable Earth flyby for asteroid 1994 CC will occur in the year 2074 when the space rock trio flies past Earth at a distance of two-and-a-half million kilometers (1.6 million miles).

Of the hundreds of near-Earth asteroids observed by radar, only about 1 percent are triple systems.