By SpaceRef Editor
July 4, 2012
Filed under Astrophysics, The Antarctic Sun, US 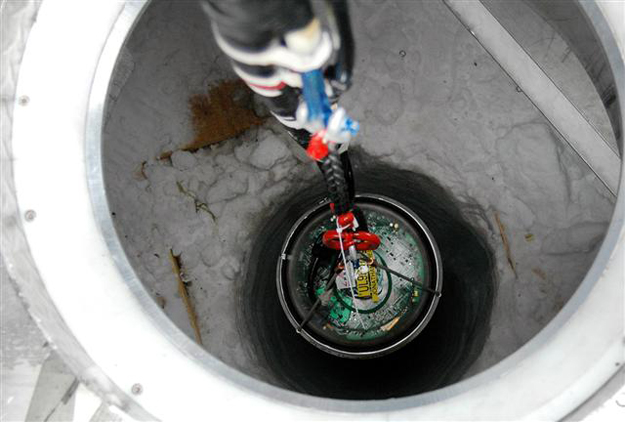 A digital optical module is lowered into the ice at the South Pole in 2010 for the IceCube Neutrino Observatory. The under-ice telescope recently observed the highest-energy neutrino oscillations ever detected. Photo Credit: Peter Rejcek/Antarctic Photo Library

The IceCube Neutrino Observatory recently made headlines for delving into particle physics with the announcement that the under-ice telescope observed the highest-energy neutrino oscillations ever detected.

The announcement came during a poster presentation at the International Conference on Neutrino Physics in Kyoto, Japan. IceCube post-doc Andreas Gross from the Technical University of Munich, Germany, revealed how the neutrino detector caught the transformation of one type of neutrino into another.

Gross used data from the DeepCore array within IceCube, a unique telescope buried within a cubic kilometer of the ice sheet between 1.45 and 2.45 kilometers below the surface of the geographic South Pole. Its massive size helps it detect the high-energy subatomic particle called a neutrino.

IceCube researchers are particularly interested in high-energy neutrinos that result from violent astrophysical events in the far-flung corners of the universe, such as exploding stars or the formation of black holes. The experiment consists of 86 strings of digital optical modules (DOMs) that contain photomultipliers, which detect the flash of light created by the rare collision of a neutrino with an atom in the ice called a muon.

The IceCube DeepCore extension consists of six densely deployed strings of DOMs and seven normally deployed strings. DeepCore’s two defining characteristics are the close proximity of the strings and that a number of them are positioned below 2,000 meters in the ice below a major dust layer, giving the detector an extremely clear window to catch neutrino interactions.

In addition, the DeepCore DOMS also boast new photomultiplier tubes that make them more efficient. This allows the DeepCore “sub-detector” to track neutrinos with energies as low as 10 gigaelectronvolts (GeV) versus the high-energy neutrinos from astrophysical origins that clock in above the 1,000 GeV level.

The high-energy neutrino oscillations that Gross used in his analysis were between 10 and 100 GeV. All events consisted of muon neutrinos oscillating into tau neutrinos. The results improve scientists’ understanding of neutrino types and confirm that oscillations take place at higher energies then previously found.

“This is our first step into particle physics,” Gross told Nature news.

Although such muon-to-tau oscillations have been well studied by accelerator-based neutrino experiments at lower energies, the results confirm that the oscillations behave as suspected in higher-energy ranges, Nature reported.

IceCube researchers told Nature that they may eventually be able to contribute to an explicit understanding of the neutrino mass hierarchy, or which of the three known neutrino types, or “flavors,” is the heaviest and which is the lightest.

IceCube was built over the course of seven years during the short summer field seasons at the South Pole Station between 2002 and 2011 under the National Science Foundation’s Major Research Instrumentation and Facility Construction project. Francis Halzen at the University of Wisconsin in Madison is the chief scientist on the project.