The Economic Impact of Commercial Space Transportation on the U.S. Economy: 2002

By SpaceRef Editor
March 31, 2004
Filed under Commerce, FAA Office of the Associate Administrator for Commercial, US 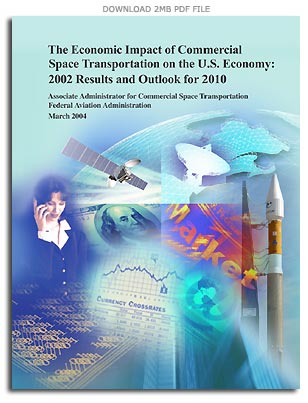 The Economic Impact of Commercial Space Transportation on the U.S. Economy: 2002 [Download 2MB PDF file]
Results and Outlook for 2010 report features a quantitative analysis of the extent to which the
manufacture and sale of commercial launch vehicles, as well as the conduct of commercial
space activities enabled by the launch industry, are responsible for contributing to production
and generating jobs in a variety of space- and non-space-related industries in the United States.

This report examines the U.S. commercial space transportation industry and the launchenabled
industries together to assess the full economic impact of commercial space
transportation on the U.S. economy. Those industries include launch vehicle manufacturing
and services, satellite manufacturing, ground equipment manufacturing, satellite services,
remote sensing, and distribution industries. The report highlights how those industries
affected the economic activity, employee earnings, and number of jobs in all major U.S.
industry sectors, as defined by the U.S. Department of Commerce’s RIMS II economic model.
This is the Federal Aviation Administration Associate Administrator for Commercial Space
Transportation’s (FAA/AST) second study of the commercial launch industry’s effect on the
nation’s economy. The first study, released in 2001, determined that in 1999 commercial
space transportation and enabled industries were directly and indirectly responsible for
$61.3 billion in economic activity, $16.4 billion in employee earnings, and 497,000 jobs
in the United States.

The impacts quantified in this report are based on data for the year 2002 and reveal that
U.S. economic activity linked to the commercial space industry totaled over $95.0 billion and
contributed to $23.5 billion in employee earnings throughout the United States. Over 576,000
people were employed in the United States as a result of the demand for commercial space
transportation and enabled industries’ products and services. A summary of the economic
impacts of commercial space transportation and enabled industries on the U.S. economy
is shown on the next page.

Total Impacts on the U.S. Economy Generated by Commercial Space Transportation
and Enabled Industries, 1999 and 20021

Section 2 of this study explores the potential future economic impact of the U.S. launch
vehicle manufacturing and services sector by exploring two scenarios for the industry in 2010.
Under a constrained scenario the U.S. would have only a 10% share of the commercial orbital
and suborbital launch markets forecast for 2010, while under a robust scenario the U.S. would
have 60% of the orbital and 75% of the suborbital markets for that year. The constrained
scenario shows that the launch vehicle manufacturing and services sector would generate
markedly lower economic impact than in 2002, while the robust scenario puts the sector at
approximately the same levels as in 1999. A summary of the economic impacts of the two
2010 scenarios is provided below.

Projected Total Impacts on the U.S. Economy Generated by the Commercial
Launch Vehicle Manufacturing and Services Sector in 2010

1 Values are in current dollars, not adjusted for inflation.