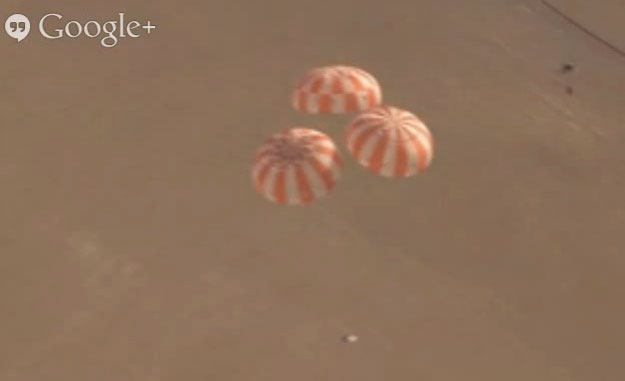 A complicated, high-altitude test Wednesday demonstrated NASA’s new Orion spacecraft could land safely even if one of its parachutes failed.

The 10th in a series of evaluations to check out the Orion multipurpose crew vehicle’s parachute system dropped the test capsule from a C-17 aircraft at its highest altitude yet, 35,000 feet above the Arizona desert. One of three massive main parachutes was cut away early on purpose, leaving the spacecraft to land with only two. The test at the U.S. Army’s Yuma Proving Ground was the highest-altitude test of a human spacecraft parachute since NASA’s Apollo Program.

During previous tests, a mock capsule was dropped from a height of 25,000 feet and the parachutes deployed at no higher than 22,000 feet. The extra 10,000 feet of altitude at the beginning of Wednesday’s test made the demonstration the best so far of Orion’s parachute flight and landing.

“The closer we can get to actual flight conditions, the more confidence we gain in the system,” said Chris Johnson, project manager for the Orion capsule parachute assembly system at NASA’s Johnson Space Center in Houston. “What we saw today — other than the failures we put in on purpose — is very similar to what Orion will look like coming back during Exploration Flight Test-1’s Earth entry next year.”

During its return from space, Orion’s parachute system will begin to deploy 25,000 feet above the ground.

Engineers gathered data on the effects of losing a parachute during the descent. The team already proved Orion can land with just two of its three main parachutes, but this was the first opportunity to study how one parachute pulling away in mid-flight might affect the remaining two.

“We wanted to know what would happen if a cable got hooked around a sharp edge and snapped off when the parachutes deployed,” said Stu McClung, Orion’s landing and recovery system manager at Johnson. “We don’t think that would ever happen, but if it did, would it cause other failures? We want to know everything that could possibly go wrong, so that we can fix it before it does.”

The test was part of a series of parachute tests that will enable NASA to certify Orion to carry humans into space. The system already has met the necessary requirements for Orion’s first mission, Exploration Flight Test-1 (EFT-1), in September 2014. During that flight, Orion will travel 3,600 miles into orbit then return to Earth at speeds as fast as 20,000 mph, putting the parachute system to the test again as it lands in the Pacific Ocean.