By SpaceRef Editor
December 23, 2010
Filed under Earth, polar, The Antarctic Sun, US 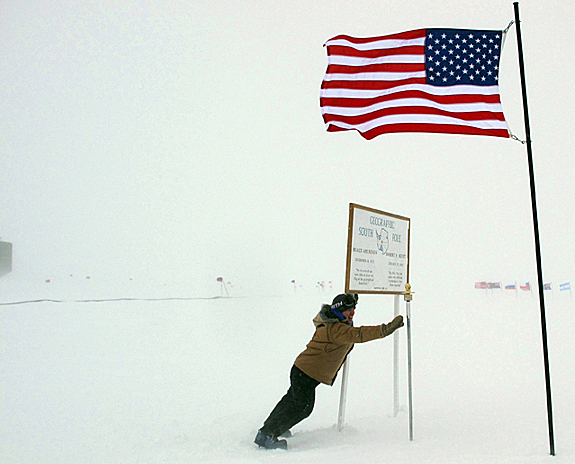 Image: Polie Ethan Good braces himself at the geographic South Pole during a storm that grounded flights for four days. Several weather records were broken during the storm, with wind gusts flirting near 40 knots. Photo Credit: Al Baker

Antarctic Sun: We were sitting in the South Pole Station cargo office on Saturday morning, Nov. 6, when Logistics manager Paddy Douglas announced that there was a storm coming.

Personnel would need to put up a flag line to summer camp, a collection of Jamesway buildings (heavy-duty tents) that house station workers, so those of us who live there do not get lost on our way to and from the elevated station building, about a half-mile away.

I looked at some of the concerned faces of the new Polies, who I’m sure conjured up images of survival, trekking in whiteout conditions to get their omelet at Sunday brunch only to take a wrong turn and end up disoriented on the frozen plateau.

This very meeting in the cargo office is where the name “Death Claw” was discussed, a phrase that conjures science fiction images of a gnarly hand of wind, snow and ice coming to envelop the South Pole.

The winds blew for about four days, longer than South Pole Area Manager and acting Area Director Martin Lewis can remember for this time of year, putting flight schedules behind.

Hardened veterans like the science carpenters are “unaffected” by the weather, said foreman Jason Hunter. They worked feverishly to keep up with work orders for repairs to the Jameways to make sure their fellow community members have a warm place to sleep at night.

After eight summers, science carpenter Kate Allen shares her sentiments, “I think it’s fun. Not fun for operations but fun for those of us that like to play in the snow.”

These are the types of people that make the South Pole Station what it is. Tough stalwarts like Hunter, Allen and Lewis look at a storm like this and decide they only need one more layer of clothes for the day.

For the rest of us who are looking forward to a mellow minus 35F, 7-knot day that is typical for this time of year, we must grin and bear it, knowing that through this epic battle with the “Death Claw” we are becoming true Polies.