Summer Has Arrived at Concordia Research Base in Antarctica 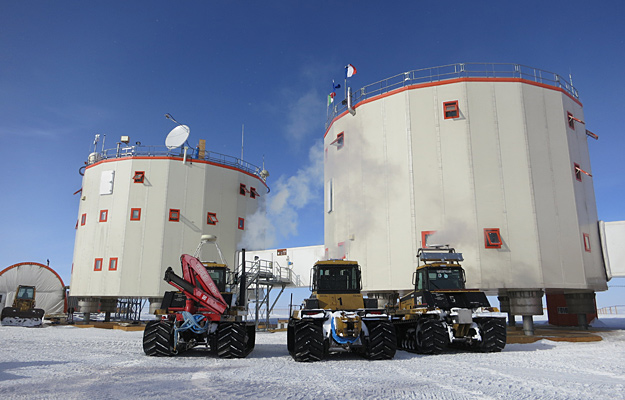 Three rugged vehicles parked in front of Concordia research base in Antarctica. During the cold winter months the machines are stored from the snow and wind. When the temperatures rise in the summer they are service and used to prepare the base for the arrival of over 50 scientists.Credits: IPEV/PNRA-E. Bondoux

The first plane to reach Antarctic research base Concordia in nine months landed yesterday, bringing fresh food and replacements for the crew that spent winter in one of the most isolated places on Earth. Summer has definitely arrived.

Concordia research station in Antarctica is a place of extremes. In winter, no sunlight is seen for almost four months and the typical crew of 12-15 live in complete isolation. In summer, the Sun stays above the horizon and over 50 scientists flock to the base. Concordia sits on a plateau 3200 m above sea level. The location offers researchers from disciplines as diverse as astronomy, seismology, human physiology and glaciology a unique laboratory for their studies.

No transport is possible in the winter because of the permanent darkness and temperatures as low as -80*C. At these temperatures, brake fluid and even fuel freeze, making it impossible to reach the base. 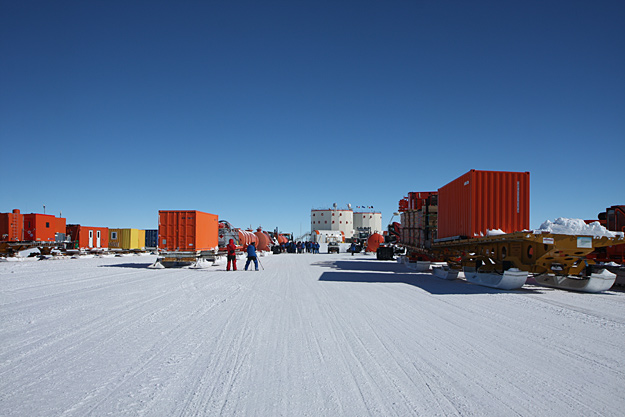 Caravans carrying 150 tonnes of fuel, supplies and heavy equipment arrive at Concordia research station 3200 m above sea level in Antarctica. The 1100 km traverse from Dumont d’Urville on the coast takes ten days to complete, climbing over 3000 m in the process. The return trip takes two days less because it is downhill all the way.

During the winter months the station has to be self-sufficient and rely on supplies stockpiled during the summer. To cater for the arrival of summer camp, the winter crew must prepare the base. To start, the quarters are thoroughly cleaned to welcome the guests. The 2 km-long runway is cleared by bulldozer and its marker flags dug out from up to a metre of wind-swept snow.

The summer power station is started. Summer tents are checked, heated and beds laid. Equipment and machinery such as skidoos and snowmobiles that are stored in a tunnel under the snow during winter are brought out, serviced and started. For the permanent crew it is a time of mixed feelings, says veteran Concordian Eoin Macdonald-Nethercott: “After spending months alone there is a bit of trepidation, you know everything is going to change. But after the first plane lands, within a week you are back to feeling it is normal.”

In addition to transporting scientists and equipment to the base, supplies for next winter are delivered by plane and over land. The usually silent landscape is disturbed by daily take-offs and landings by aircraft. Three separate expeditions arrive with heavier equipment. The 1100 km traverse from the Dumont d’Urville station takes ten days to complete, climbing over 3000 m in the process.

“The caravans carry 150 tonnes of fuel, food and equipment each time,” explains Claire le Calvez, responsible for Concordia at the French polar institute IPEV. This year, the summer campaign will focus on two main programmes: astronomy and glaciology. The new ESA-sponsored medical research doctor will arrive with the new winter crew later this month to study the effects of isolation in preparation for future long-duration space missions.