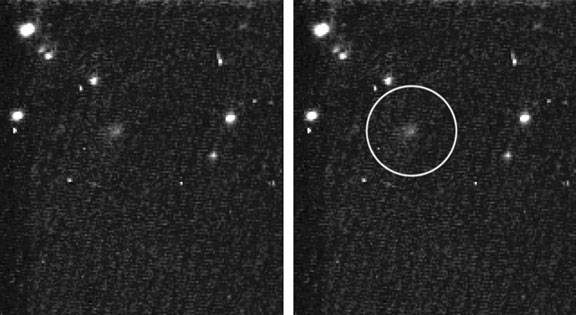 The first image of comet Tempel 1 taken by NASA’s Stardust spacecraft is a composite made from observations on Jan. 18 and 19, 2011. On Valentine’s Day (Feb. 14 in U.S. time zones), Stardust will fly within about 200 kilometers (124 miles) of the comet’s nucleus. Image credit: NASA/JPL-Caltech

“This is the first of many images to come of comet Tempel 1,” said Joe Veverka, principal investigator of NASA’s Stardust-NExT mission from Cornell University, Ithaca, N.Y. “Encountering something as small and fast as a comet in the vastness of space is always a challenge, but we are very pleased with how things are setting up for our Valentine’s Day flyby.”

The composite image is a combination of several images taken by Stardust’s navigation camera. Future images will be used to help mission navigators refine Stardust’s trajectory, or flight path, as it closes the distance between comet and spacecraft at a rate of about 950,000 kilometers (590,000 miles) a day. On the night of encounter, the navigation camera will be used to acquire 72 high-resolution images of the comet’s surface features. Stardust-NExT mission scientists will use these images to see how surface features on comet Tempel 1 have changed over the past five-and-a-half years. (Tempel 1 had previously been visited and imaged in July of 2005 by NASA’s Deep Impact mission).

Launched on Feb. 7, 1999, Stardust became the first spacecraft in history to collect samples from a comet (comet Wild 2), and return them to Earth for study. While its sample return capsule parachuted to Earth in January 2006, mission controllers were placing the still-viable spacecraft on a path that would allow NASA the opportunity to re-use the already-proven flight system if a target of opportunity presented itself. In January 2007, NASA re-christened the mission “Stardust-NExT” (New Exploration of Tempel), and the Stardust team began a four-and-a-half year journey for the spacecraft to comet Tempel 1. This will be the second exploration of Tempel 1 by a spacecraft (Deep Impact).

Along with the high-resolution images of the comet’s surface, Stardust-NExT will also measure the composition, size distribution and flux of dust emitted into the coma, and provide important new information on how Jupiter-family comets evolve and how they formed 4.6 billion years ago.