By SpaceRef Editor
June 27, 2013
Filed under UNIVERSITY OF COLORADO AT BOULDER, US 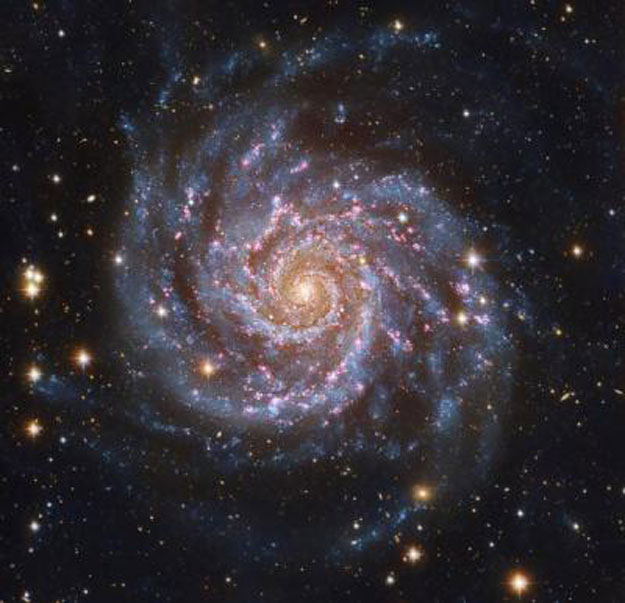 Let’s all fist bump: Spiral galaxies like our own Milky Way appear to be much larger and more massive than previously believed, according to a new University of Colorado Boulder study by researchers using the Hubble Space Telescope.

CU-Boulder Professor John Stocke, study leader, said new observations with Hubble’s $70 million Cosmic Origins Spectrograph, or COS, designed by CU-Boulder show that normal spiral galaxies are surrounded by halos of gas that can extend to over 1 million light-years in diameter. The current estimated diameter of the Milky Way, for example, is about 100,000 light-years. One light-year is roughly 6 trillion miles.

The material for galaxy halos detected by the CU-Boulder team originally was ejected from galaxies by exploding stars known as supernovae, a product of the star formation process, said Stocke of CU-Boulder’s astrophysical and planetary sciences department. “This gas is stored and then recycled through an extended galaxy halo, falling back onto the galaxies to reinvigorate a new generation of star formation,” he said. “In many ways this is the ‘missing link’ in galaxy evolution that we need to understand in detail in order to have a complete picture of the process.”

Building on earlier studies identifying oxygen-rich gas clouds around spiral galaxies by scientists at the Space Telescope Science Institute in Baltimore, the University of Massachusetts, Amherst College and the University of California, Santa Cruz, Stocke and his colleagues determined that such clouds contain almost as much mass as all the stars in their respective galaxies. “This was a big surprise,” said Stocke. “The new findings have significant consequences for how spiral galaxies change over time.”

In addition, the CU-Boulder team discovered giant reservoirs of gas estimated to be millions of degrees Fahrenheit that were enshrouding the spiral galaxies and halos under study. The halos of the spiral galaxies were relatively cool by comparison — just tens of thousands of degrees — said Stocke, also a member of CU-Boulder’s Center for Astrophysics and Space Astronomy, or CASA.

Shull, a professor in CU-Boulder’s astrophysical and planetary sciences department and a member of CASA, emphasized that the study of such “circumgalactic” gas is in its infancy. “But given the expected lifetime of COS on Hubble, perhaps another five years, it should be possible to confirm these early detections, elaborate on the results and scan other spiral galaxies in the universe,” he said.

Prior to the installation of COS on Hubble during NASA’s final servicing mission in May 2009, theoretical studies showed that spiral galaxies should possess about five times more gas than was being detected by astronomers. The new observations with the extremely sensitive COS are now much more in line with the theories, said Stocke.

The CU-Boulder team used distant quasars — the swirling centers of supermassive black holes — as “flashlights” to track ultraviolet light as it passed through the extended gas haloes of foreground galaxies, said Stocke. The light absorbed by the gas was broken down by the spectrograph, much like a prism does, into characteristic color “fingerprints” that revealed temperatures, densities, velocities, distances and chemical compositions of the gas clouds.

“This gas is way too diffuse to allow its detection by direct imaging, so spectroscopy is the way to go,” said Stocke. CU-Boulder’s Green led the design team for COS, which was built by Ball Aerospace & Technologies Corp. of Boulder for NASA.

While astronomers hope the Hubble Space Telescope keeps on chugging for years to come, there will be no more servicing missions. And the James Webb Space Telescope, touted to be Hubble’s successor beginning in late 2018, has no UV light-gathering capabilities, which will prevent astronomers from undertaking studies like those done with COS, said Green.

“Once Hubble ceases to function, we will lose the capability to study galaxy halos for perhaps a full generation of astronomers,” said Stocke. “But for now, we are fortunate to have both Hubble and its Cosmic Origins Spectrograph to help us answer some of the most pressing issues in cosmology.”