By SpaceRef Editor
May 9, 2003
Filed under Commerce, SpaceX, US

happened in the past few months, so there is a lot of good information

in the update below. We have had several successful firings of

complete, the second stage is in fabrication, our prototype fairing

structure is done and a lot of the small, but important pieces

and the regulatory authorities, which seemed to be very well received.

Representatives from NASA, the Dept of Defense and several commercial

satellite builders were present on the customer side. On the regulatory

front, we had Air Force Range & Safety and the FAA in attendance,

continuing support in helping us move Falcon through the regulatory

and a written launch commitment from an international government

customer. While still preliminary, this seems to confirm that

there is at least modest demand for launching small satellites.

to have more definite numbers for the payload capability of Falcon

to 200km LEO from Cape Canaveral. This is 25% above our initial

target of a 1,000lb payload capability. Pricing for the Falcon

remains constant at $6 million per launch.

in Q4 2004, SpaceX will offer Falcon with two liquid strap-on

boosters in a configuration similar to Boeing’s Delta IV

to above 4000lbs (1820kg) and enable GTO payloads of approximately

1300lbs (590kg). Pricing and final payload capabilities are not

yet determined and a more formal announcement will follow in coming

asked several times whether we intend to pursue human spaceflight.

The answer is that SpaceX will definitely pursue that market in

the long term. In fact, part of the reason why we have spent substantial

capital on reliability — some would argue more than is necessary

for human transportation. However, we believe it makes sense to

prove reliability with satellites before putting people on the

rocket. 99% reliability is considered exceptionally good in the

satellite delivery world, but is not very satisfactory for people.

several months, everyone at SpaceX will be heads down working

hard towards our first satellite launch. Before too long, we should

that has come together to make it happen.

Merlin at full thrust with a copper chamber 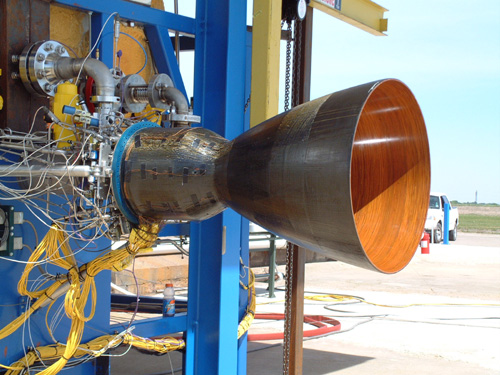 weeks of testing, we are at about 94.5% combustion efficiency

on a copper heatsink chamber. We will be firing with an ablative

chamber in about six weeks, once we correct an issue with the

metal insert that joins the injector head to the chamber. That

should bump that up efficiency by a few percentage points and

put us above our target of 96%. Including gas generator losses,

vacuum specific impulse would then be about 310s with a modest 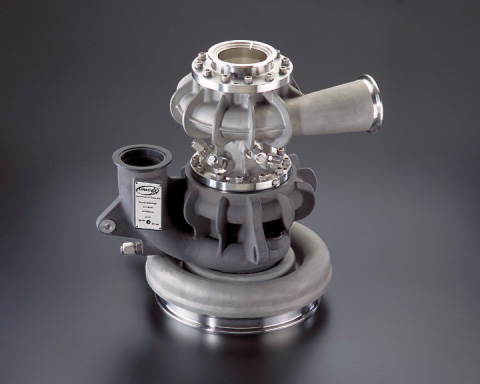 we expect to run the Merlin turbo-pump and verify pressures &

flow rates. As mentioned before, our approach is a gas generator

pump. Like the rest of our development, all components except

those used for calibration are at or near flight weight. At 150lbs,

Despite delays due to the transport company truck breaking down

on the way to pick up the first stage in Wisconsin, it arrived

in time for the design review in good shape. Our shipping fixture

with additional bracing from Spincraft did a great job of supporting

the stage against lateral loads from the road. We could measure

no meaningful deviation from circularity when it arrived, despite

the fact that it was shipped unpressurized. This was actually

an important practical test of structural stiffness as compared

to an Atlas II/III, which requires pressure stabilization in transit

to maintain its shape. 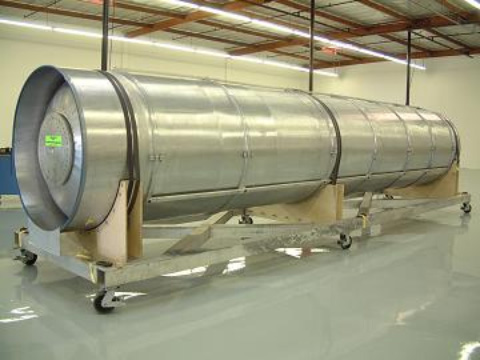 The vehicle avionics and flight termination system (apart from

the linear shaped charges) are mounted on the cone, which is in

is the satellite release system. We have decided to use a low

zero debris that could contaminate a satellite or spacecraft’s 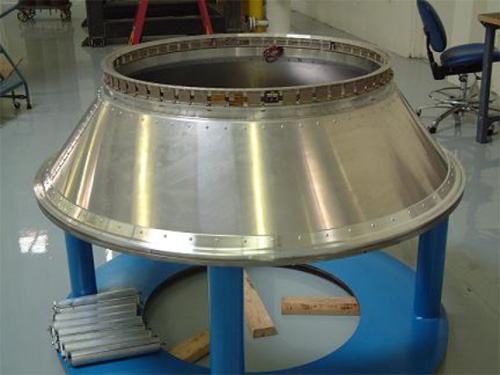 Stand Instrumentation and Setup in Texas

up at our propulsion testing facility in Texas. You can see it

on the left under construction in this picture taken in February

during a cold snap (that is ice on the ground). The large white

pressurant ball, formerly used for wind tunnel tests, is made

of one foot thick steel and weighs about 35 tons. In the middle

Boeing or Northrop, so it is quite expensive and a lot of work

to build and check out. In the end, however, we should be able

to characterize very accurately the flows, pressures and temperatures

throughout the thrust chamber assembly and fine tune the injector 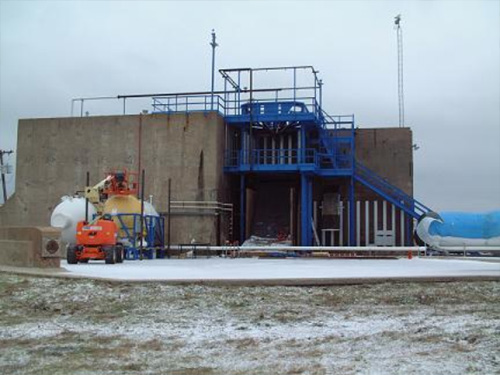 The tooling for joining the fairing skin panels, ring frames and

stringers has been built and both fairing halves assembled. Our

small construction crew, most of whom are former Boeing veterans

from Huntington Beach, are doing a great job. They’ve built

dozens of fairings in the past for everything from Delta II &

IV to the Titan IV.

unit is an engineering prototype, which we will place in a test

harness and verify all the expected load cases. Depending on how

well the physical testing compares to our finite element model

predictions, we will consider reducing the aluminum skin thickness 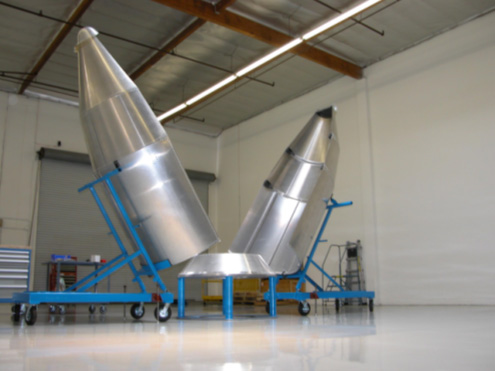