By SpaceRef Editor
August 16, 2002
Filed under CONTOUR, Spacewatch, US

In this subtracted image in which moving objects are revealed by pairs of images, one dark and one bright, taken by Jim Scotti with the Spacewatch 1.8-meter telescope on Kitt Peak on 2002 August 16, there are two parallel trails near one of the predicted positions of the CONTOUR spacecraft, radio contact with which had been lost the day before following a commanded large velocity impulse maneuver. 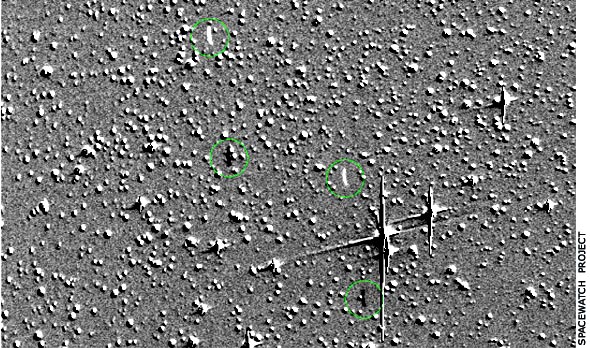 These trails were discovered and measured by Jeff Larsen during his re-examination of the data. The curvature of the trails is a natural characteristic of the drift scanning process at this high declination. The images are oriented with north at the right and west up.

The positive images are the earlier time. The fact that there are two trails indicates that the spacecraft must have separated into two pieces that are still moving in nearly parallel directions.
Media: Please indicate (c) 2002 The Spacewatch Project, Lunar and Planetary Laboratory, The University of Arizona in any reproductions of this image.