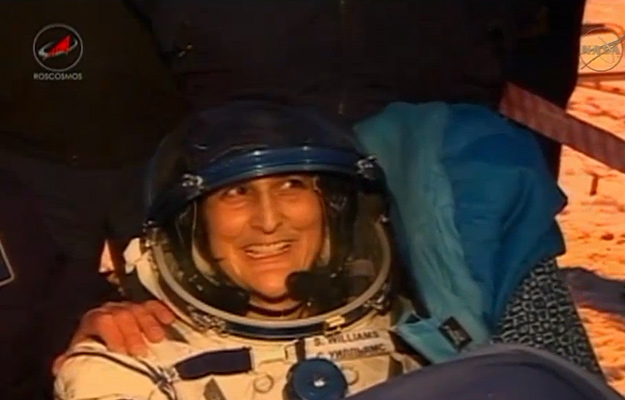 A Russian recovery team and NASA personnel reached the landing site by helicopter shortly afterward to assist the crew and conduct health assessments.

The return of Williams, Hoshide and Malenchenko wraps up 127 days in space for the three since their launch from the Baikonur Cosmodrome in Kazakhstan on July 15, including 125 days spent aboard the International Space Station.

Earlier the trio bid farewell to their fellow crewmates, NASA astronaut Kevin Ford and Russian cosmonauts Evgeny Tarelkin and Oleg Novitskiy, and closed the hatches between the spacecraft at 2:15 p.m. When the Soyuz undocked from the station’s Rassvet module at 5:26 p.m. it marked the end of Expedition 33 and the beginning of Expedition 34 under the command of Ford.

Williams, a NASA astronaut, spent a total of 322 days in space during her two long-duration missions. She previously served aboard the station as an Expedition 14/15 flight engineer from Dec. 9, 2006 to June 22, 2007. Williams has completed a total of 50 hours, 40 minutes of spacewalking time over seven spacewalks, including the three she conducted during Expeditions 32 and 33.

This was the second trip into space for Hoshide of the Japan Aerospace Exploration Agency, who visited the station as an STS-124 mission specialist aboard space shuttle Discovery in 2008. That mission delivered and installed Japan’s Kibo pressurized module.

Russian Soyuz Commander Malenchenko completed his fifth spaceflight for a total of 642 days in space, placing him seventh on the all-time endurance list. Malenchenko, whose first launch was to the Russian space station Mir in 1994, has now visited the International Space Station four times.