Southwest U.S. As Seen From Orbit 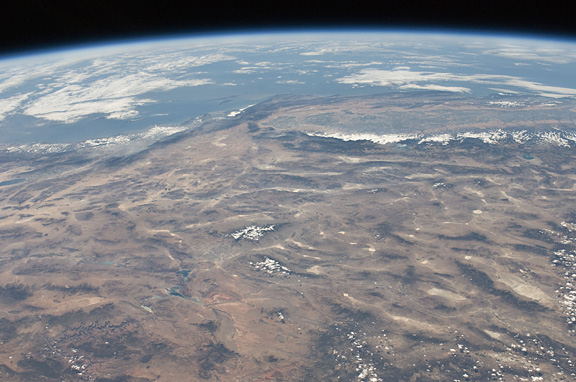 This striking panoramic view of the southwestern USA and Pacific Ocean is an oblique image photographed by an Expedition 24 crew member looking outwards at an angle from the International Space Station (ISS). While most unmanned orbital satellites view Earth from a nadir perspective-in other words, collecting data with a “straight down” viewing geometry-crew members onboard the space station can acquire imagery at a wide range of viewing angles using handheld digital cameras. The ISS nadir point (the point on Earth’s surface directly below the spacecraft) was located in northwestern Arizona, approximately 260 kilometers to the east-southeast, when this image was taken. The image includes parts of the States of Arizona, Nevada, Utah, and California together with a small segment of the Baja California, Mexico coastline at center left.

Several landmarks and physiographic features are readily visible. The Las Vegas, NV metropolitan area appears as a gray region adjacent to the Spring Mountains and Sheep Range (both covered by white clouds). The Grand Canyon, located on the Colorado Plateau in Arizona, is visible (lower left) to the east of Las Vegas with the blue waters of Lake Mead in between. The image also includes the Mojave Desert, stretching north from the Salton Sea (left) to the Sierra Nevada mountain range. The Sierra Nevada range is roughly 640 kilometers long (north-south) and forms the boundary between the Central Valley of California and the adjacent Basin and Range. The Basin and Range is so called due to the pattern of long linear valleys separated by parallel linear mountain ranges — this landscape, formed by extension and thinning of Earth’s crust, is particularly visible at right. high res (1.4 M) low res (89 K)