By SpaceRef Editor
March 24, 2012
Filed under Astrophysics, Earth, The Antarctic Sun, US 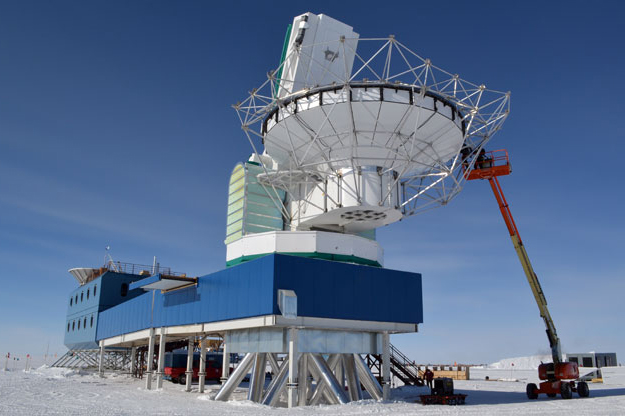 Construction workers on a lift assemble the metal superstructure for the ground shield on the South Pole Telescope during the 2011-12 field season. The shield will eliminate ground reflection inteference as the telescope begins a new experiment on cosmic inflation. Photo Credit: Peter Rejcek

The South Pole Telescope (SPT), the largest such instrument ever installed at the U.S. Antarctic Program’s research station at the bottom of the world, completed its scan of 2,500-square degrees of night sky at the end of the 2011 winter. The 10-meter telescope has spied hundreds of previously unseen galaxy clusters, including the most massive ever detected, since seeing its first light at the beginning of the 2007 South Pole winter.

“We’re trying to understand what dark energy could be, and our way of looking at it is to see the structures involved,” explained John Carlstrom, principal investigator for the experiment, which includes dozens of collaborators. “The project as a whole has been more successful than any of us thought.”

Galaxy clusters, thanks to the pull of gravity, are the largest structures to have evolved in the cosmos. The SPT hunts for them using the Sunyaev-Zel’dovich (SZ) effect — a small distortion in the cosmic microwave background (CMB), a “glow” left over from the Big Bang some 14 billion years ago. Such distortions are created as background radiation passes through a large galaxy cluster — effectively creating a shadow from the cluster in the microwave background.

In 2008, the telescope detected its first galaxy clusters using the SZ effect. Two years later, astronomers announced the discovery of the most massive galaxy cluster yet, tipping the scales at the equivalent of 800 trillion suns, and holding hundreds of galaxies.

Mapping the number of such clusters over the history of the universe can tell researchers how much influence dark energy had on their growth, according to Bradford Benson, a postdoctoral research fellow at the University of Chicago. He is also the lead author of a recent paper that puts additional constraints, based on SPT data, on the models cosmologists use to understand a universe increasingly dominated by dark energy.

It sounds like a disembodied entity that Captain Kirk and company might battle in an episode of Star Trek. Dark energy is the prevalent explanation for the accelerating expansion of the universe. Dark energy appears to counteract the gravitational attraction between galaxies.

In a younger, smaller universe billions of years ago, gravity had a greater influence, allowing galaxy clusters to grow and clump together like dust bunnies on a wood floor. In a study last year using SPT data, lead author Christian L Reichardt, with the University of California, Berkeley, and colleagues found that dark energy accounted for no more than 1.8 percent of the total energy-density of the universe at a time when it was only 400,000 years old. Today, dark energy accounts for more than 70 percent of all the matter and energy in the universe.

“Everything is getting diluted. Dark energy is just sitting there,” said Carlstrom, director of the Kavli Institute of Cosmological Physics at the University of Chicago. “In the future, it dominates. Right now it is two-thirds of the energy-density of the universe.”

Now, Carlstrom, Benson and their team want to peer back to near the beginning of time, a fraction of a moment after the Big Bang, when the universe expanded exponentially, a theory known as inflation.

During the 2011-12 season, they swapped the telescope’s high-tech “camera” purposefully designed to detect the SZ effect with one sensitive to the signature left by cosmic inflation on the pattern of the CMB.

CMB radiation, often referred to as a faint hiss of microwaves, comes from every direction in the sky. It is almost a perfectly uniform plasma, with a temperature of 2.7 degrees above absolute zero on the Kelvin scale.

But it contains “hot” and “cold” spots that are slight irregularities in its near-perfect uniformity, which is known as anisotropy. These spots can tell cosmologists something about the geometry of the universe, the amounts and types of dark matter and energy that make up the cosmos, and even something about the universe’s ultimate fate.

“Now, we want to do an even more powerful experiment,” Carlstrom said.

Switching experiments required more than just upgrading the technology for the telescope receiver. The shielding that prevents interference from the horizon must be augmented. That meant turning the telescope’s round 10-meter reflector shield into an octagon by extending the shielding around the dish by about 1 meters.

The SPT-Pol receiver, for polarization, is a three-year project. While the new experiment will focus on finding the inflation signal, or at least setting new constraints, the SPT will also continue to map galaxy clusters with even more sensitive sensors but on a small pie of the sky.

“We’ll go much, much deeper, and do the same kind of science, but much more sensitive than what we have been doing. We’re adding more capability; we’re not walking away from what we’ve been doing, we’re going much deeper with the dark energy experiment,” Carlstrom said.

Other telescopes at the South Pole are also after the B-mode polarization predicted by the theory of inflation, including the Background Imaging of Cosmic Extragalactic Polarization telescope, or BICEP. Far smaller on the ground than the SPT, BICEP can scan the CMB on much larger angular scales.

In contrast, the SPT focuses on smaller angular scales with greater detail, even delving into particle physics, including revealing characteristics about subatomic particles called neutrinos. Another experiment at the South Pole, the IceCube Observatory, buried deep into the ice sheet, is attempting to detect high-energy neutrinos as the pass through the Earth to learn about cosmic events like supernovas.

“One of our goals is to search in complementary [fashion] with BICEP for B-modes,” Carlstrom said. “We’ll try to measure gravitational waves. At the same time, we’ll do this very cool physics experiment figuring out what the total sum of the masses of the different neutrinos are.”

Indeed, the SPT has proven itself to be the Swiss Army knife of CMB telescopes.

In addition to mapping galaxy clusters, it has also detected the bright thermal emissions from early star-forming galaxies — something no one expected to see.

“It’s a whole new window on the universe that was discovered with that,” Carlstrom said.

Benson said the plan going forward in the years to come would be to also measure more of the dusty, star-generating galaxies of the early universe.

And that’s just what the SPT has to say about this universe. Carlstrom explained that the theory of inflation, in one interpretation, assumes a pre-existing “piece” of space-time, something almost inconceivably small with such a high energy density capable of inflating the whole universe.

“It should happen all the time,” he said nonchalantly. “Inflation gives you an answer to the question, ‘Where did our universe come from?’ It comes from some other space-time. People call it the multiverse.”

Astronomy at the South Pole truly has reached the final frontier.