By SpaceRef Editor
December 29, 2011
Filed under Earth, polar, The Antarctic Sun, US 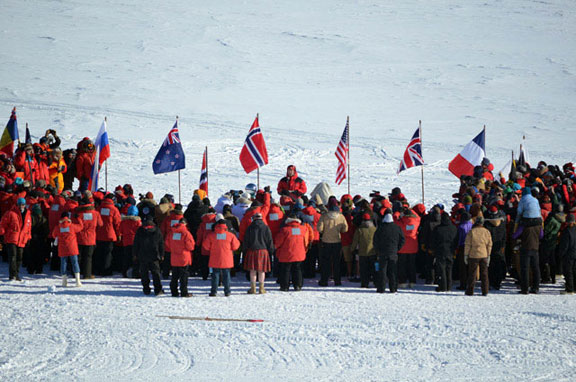 Norwegian Prime Minister Jens Stoltenberg addresses a crowd of people from the Amundsen-Scott South Pole Station, along with numerous visitors who arrived by Dec. 14 to celebrate the achievements of Norwegian Roald Amundsen, who led the first successful expedition to the South Pole 100 years ago. Photo Credit: Peter Rejcek

On Dec. 14, 1911, Amundsen and four companions became the first people in history to reach the Pole. Briton Robert Falcon Scott and his party arrived about a month later but perished on the return journey.

Stoltenberg and his companions, which included members of his staff and major Norwegian broadcast and print media, spent four days touring the station’s facilities and meeting with the many visitors who had arrived at the bottom of the world to commemorate Amundsen’s achievement.

Amundsen’s success buoyed the young nation of Norway, which had become independent from Sweden in 1905. A century later, the accomplishment still looms large among his countrymen.

“It was an important event for the world, but it was especially important for Norway, because we were a very young nation, and it was an important part of nation building,” Stoltenberg explained shortly after arriving at the South Pole.

“I think no one can understand how it was for him, because no one had done it before; they were going into unknown territory, they were going into something that was untested. That creates an extra danger and an extra challenge,” he said later during an interview with The Antarctic Sun. “It was really a great achievement to go to the South Pole and back again.”

Stoltenberg is the first head of state to overnight at the South Pole Station. The United States first established the research facility during the 1956-1957 Southern Hemisphere summer, as part of the International Geophysical Year, a worldwide scientific campaign that spurred the space race and helped establish the U.S. Antarctic Program (USAP).

The National Science Foundation (NSF), a federal agency that funds science and engineering research across multiple disciplines, manages the USAP. It operates three research stations, two science vessels, and field camps across the Antarctic and the surrounding Southern Ocean.

The current South Pole Station — the third in the past 55 years — was dedicated in January 2008. It supports a wide variety of research, focusing on atmospheric science and astrophysics thanks to the pristine quality and clarity of the cold polar air.

Stoltenberg had the opportunity to visit several of the major experiments and observatories that lie outside of the main station building. In true Norwegian fashion, he and his companions cross-country skied to each location on a nearly windless day, with a relatively mild South Pole temperature of about minus 25 degrees Fahrenheit. The station, which supports about 240 people in summer, sits on the polar plateau at an elevation of 9,300 feet.

The tour included stops at telescopes that probe the mysteries of the universe, as well as a different type of telescope, located within the two-mile-high ice sheet at the South Pole, which searches for high-energy particles called neutrinos that have become a major focus of particle physics.

“I’m really impressed by all of the activities that are going on out here,” Stoltenberg said. “It’s dealing with some of the fundamental issues we are trying to understand as humankind. I really admire what the U.S. is doing here.”

John Carlstrom, the principal investigator for the South Pole Telescope, an experiment shedding light on the mysterious force known as dark energy, said he sees a parallel between the early explorers and today’s researchers, both of whom strive to push the boundaries of the known.

“[The Norwegians are] celebrating 100 years of exploration at the end of the Earth, and they get here and what they learn is that here we are, discovering the universe as far back as we can see. I like the connection,” Carlstrom said.

On Dec. 14, at 4 p.m., an official celebration was held at the ceremonial South Pole, where the 12 flags of the original signatories of the Antarctic Treaty — including the United States and Norway — fly in a half circle around a shiny, silver-colored globe. The Antarctic Treaty established the Antarctic for peaceful, scientific purposes.

The event began with the playing of the Norwegian national anthem on the flute by Zondra Skertich, who works at the South Pole Station as a cargo load planner. Skertich has been in the USAP since the 2003-04 season in different logistics and supply jobs, but this was her first stint at the South Pole.

She applied to work at the station with the hope of being there for the anniversary.

“Amundsen is my favorite explorer,” she said. “This is part of the reason I signed up to be here.”

Stoltenberg unveiled an ice bust of Amundsen during his speech. The prime minister noted that the achievements and sacrifices by the early explorers a century ago helped set the stage for today.

“The arrival at the South Pole laid the foundation for what later on developed in the cooperation we see in this area between nations — a peaceful cooperation,” he said. “This is the only continent [where] countries in the world have decided to manage jointly together in a peaceful way, to promote scientific work.”

The NSF, through its logistics contractor Raytheon Polar Services Co. (RPSC), provided the equipment and IT infrastructure to stream a series of live broadcasts back to Norway between Dec. 14 and 15 — a venture that took months to put together.

“In theory, we knew it would work, but we didn’t know how well it would do in the cold,” said Ralph Maestas, a videographer with RPSC who started working on the project more than six months ago and helped oversee the broadcasts at the Pole. “We had never laid out that much equipment outside at one time.”

It was a neat feat of communications wizardry, as all of the broadcasts took place outside of the station, where the temperature never got above minus 20 degrees Fahrenheit. Also, the station only receives limited connectivity, with about 12 hours of communications over satellites with varying degrees of bandwidth capability.

“It’s been a long time planning,” said Bill McAfee, South Pole Station IT manager. “We had to do as much testing as we could, as early as we could.”

The NSF also provided transportation for the prime minister and his party to the continent from Christchurch, New Zealand. The dignitaries first flew five hours to McMurdo Station, the USAP’s largest research base, aboard a U.S. Air Force C-17. They then boarded a second military aircraft, a ski-equipped LC-130 operated by the New York Air National Guard, for the three-hour flight to the Pole.

“Both NSF and the State Department felt it was the appropriate thing to do to support the Norwegians,” said Simon Stephenson, who served as the NSF representative for the centennial event. “It’s a big event for the Norwegians.”

The ease of travel is certainly in stark contrast to how Amundsen and Scott reached the Pole 100 years ago.

A veteran polar explorer who honed his skills with the Inuit in the Arctic, Amundsen employed sled dogs on this methodical march to the Pole. His rival, the British Capt. Scott, mostly eschewed the use of dogs, as he and his men eventually man-hauled their sleds hundreds of miles across half the frozen continent. Man-hauling was a traditional method employed by the explorers of the Royal Navy in the Arctic.

It’s a mode of travel that certainly has the admiration of a team of drivers making their own way across the barren wastes of Antarctica.

“Just about all of the new guys are reading about Scott and Amundsen’s adventures,” said Terry Billings, who leads the South Pole Operations Traverse, a convoy of tractors that pull fuel and cargo sleds between McMurdo and Pole, a journey of about 1,000 miles each way.

This year, Billings and his team will extend their route by about 500 miles into East Antarctica to retrieve equipment left at a field camp. While enjoying the warmth in the cabs of their tractors, the drivers still endure weeks of isolation, storms and the thrill of the unknown — a link of sorts to the early explorers.

“Nobody has traversed there before. There’s no route there. We just have waypoints we’re shooting for,” Billings said shortly before the traverse left the South Pole on Dec. 12, just missing the centennial celebration. “There’s no flagged route; nothing’s groomed. It’s just us and virgin snow.”

Of course, some of the trappings of modernity have come to the South Pole.

This year, for instance, the NSF established a small retail store and visitor center near the station, using expedition structures called RAC tents that were powered by solar energy. The visitor center contained posters and other decorations related to Antarctic exploration, such as reprints of the New York Times front pages from 1911 and 1912, announcing Amundsen’s achievement and Scott’s death.

Posters of South Pole research were also on display, along with computer stations that played short video clips about U.S.-supported science and logistics in Antarctica. The store offered centennial memorabilia, such as patches and hats.

An estimated 93 tourists were present on the anniversary day. Most had skied or flown to the Pole with the support of private tour operators, who had set up a Mount Everest-like base camp not far from the station in cooperation with the NSF. About 300 people are expected to visit the South Pole this year during the brief summer season, with another big pulse of tourists scheduled on Jan. 17 for the Scott anniversary.

“One thing that the prime minister’s visit has done for this day is give it a much higher visibility than it might otherwise have [gotten],” said Stephenson, division director of Arctic Sciences in NSF’s Office of Polar Programs. “I think things like the visitors center makes a lot of sense. It might be a good thing for the future.”

Jan-Gunnar Withner was among those who arrived for the centennial as part of the official celebration, speaking at the Dec. 14 ceremony. The head of the Norwegian Polar Institute, Withner and three others retraced Amundsen’s route by ski, though he and one companion abandoned the expedition a day early to be at the jubilee on time with the prime minister.

A reception and celebratory dinner followed the Dec. 14 ceremony. The prime minister and his contingent left the station the following day aboard another LC-130 — the end of an historic event, but just another chapter in a relationship between two nations.

Stoltenberg said he believes Norway and the United States will continue to work together in the Antarctic, as they did during the 2007-08 International Polar Year when Norwegian and American scientists collaborated on an overland traverse between the South Pole and Norway’s coastal Troll Station to study the dynamics of the ice sheet.

“There is potential for scientific cooperation in many areas, particularly everything related to polar explorations, but also related to climate change,” Stoltenberg said. “Science is really an area where we need more cooperation. We will achieve more together than if we work alone.”