By SpaceRef Editor
October 2, 2001
Filed under Goddard Space Flight Center, SOHO Picture of the Week, US 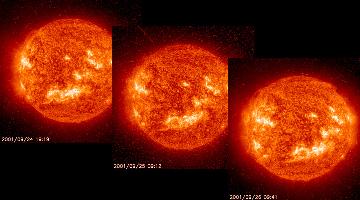 A solar flare and coronal mass ejection began a high energy proton
event that pelted the SOHO spacecraft for over three days (September
24-26, 2001). The sun is observed in extreme ultraviolet light – the
proton hits appear as white snowy particles.