SMART-1 completes its first orbit around the Moon

The next perilunae will occur with increasingly shorter intervals as the orbital period of the spacecraft continuously decreases. This is due to the thrust provided by the electric propulsion system, which is used to reduce the semi-major axis of the orbit.

The first firing of the electric propulsion engine started on 15 November at 05:23 UTC and the engine has performed flawlessly since. It will remain on until 17:48 UTC today, providing a total thrust time of 108 hours.

Another important event in the near future is a fairly long eclipse caused by the satellite crossing the Moon’s umbra for 1 hour and 50 minutes on 22 November starting at 08:52 UTC. The spacecraft has proved, during the transfer orbit, to be able to withstand even longer eclipses. However, since the batteries have not been discharged for that long since many months, the ESOC flight control team and the ESTEC and industry specialists will closely follow the event.

The following osculating orbital elements of the first orbit have been determined by a tracking campaign: 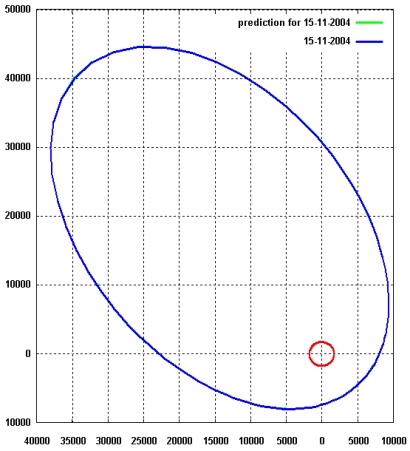 These elements are extremely close to the calculated elements of the planned orbit (see Status Report No. 31). This accurate prediction is evidence of both the good performance of the electric propulsion engine (about 1% above nominal) and the accuracy of the trajectory calculation by the flight dynamics team. In the diagram the predicted and measured osculating first lunar orbits are plotted. The accuracy is so good that the two lines coincide (the difference is smaller than the thickness of the lines).

One interesting point to note is that although the osculating orbital period is 129 hours, the actual orbit was only 89 hours. This illustrates the significant impact that the engine burns have on the orbit and marks the meaning of the osculating orbit, which is the orbit that would be travelled by the spacecraft if at that instant all perturbations, including EP thrust, would cease.