SMART-1 as a Bench Test for Electric Propulsion

The spacecraft is now flying its 264th orbit, in good status and with all functions performing nominally. After the eclipse season, the new thrusting strategy is progressing well with long thrust arcs around perigee occurring every orbit for about 10.5 hours. During the coming month this will be increased to 14 hours per orbit.

In this phase of the mission the electric propulsion system is again at the centre of operations, with the current aim to increase the apogee of the orbit so to get closer to the Moon. The performance of the engine is still very good. We have cumulated a total ON time of about 1870 hrs, consumed about 30 kg of Xenon and imparted to the spacecraft a velocity increment of about 1340 ms-1.

Since the beginning of the mission, and contrary to expectations, the discharge current on the engine of SMART-1 only shows a very low oscillation between maximum and minimum values. The magnitude of these oscillations is a factor of ten less compared to measurements made during life testing of a similar engine in a vacuum chamber on Earth. The main reason for this change appears to be a reduction in the deposition of sputtered material by the vacuum environment onto the ceramic discharge chamber walls.

At beginning of January 2004, after 1500 hours of cumulated thrusting operation, something new was noticed: a sudden change in the degree of oscillation in the discharge current. This transition remained unobserved during ground testing because of the existing high magnitude oscillations in the discharge current. Since the first activation of the ion propulsion system the expelled plasma plume has been eroding the edges of the ceramic chamber. During the first part of the mission a high degree of erosion was taking place. Now the erosion rate is reduced there is a change in the discharge current profile. The good health of the thruster was confirmed after a complete functional characterisation of the thruster was performed and compared to the acceptance test results obtained before flight.

On SMART-1, this erosion transition phase appears to both occur later in the thruster life and last longer due to an operational discharge power level of 1.2 kW instead of 1.5 kW compared with ground life testing. In addition, during the transition, the discharge tends to sporadically operate with a slightly higher discharge current.

This is perhaps of not great interest to a non-specialist, but for the SMART-1 team it is of great importance and fulfils the objective of the mission: that is to learn how to drive an electric propulsion system in a deep space mission. More detailed information on this particular flight experience will be published by the SMART-1 Electric Propulsion Working Group in June 2004.

As reported previously (see status report #20), the performance of the power subsystem during the eclipses was excellent. It is possible, now the spacecraft is out of the eclipse period and clear of the Earthís radiation belts, to consider the power generated by the solar arrays in order to predict if the power to the electric propulsion will be reduced before Moon capture.

The plot below shows the mean generated solar array power measured weekly during thrust arcs from the beginning of the mission. As reported previously, the degradation due to the trapped radiation exposure in the early orbit-raising phase of the mission was not that evident because of other factors, such as solar distance, solar array temperature and solar array de-pointing which all were affecting the amount of power generated. This seasonal effect was partly masking the drop in power seen from launch until January because of the reduced solar distance in this timeframe. Based on this data the generated power for the remainder of the year can be extrapolated. A minimum power of 1590 W will be available in early July, when the distance from the Sun will be at maximum. 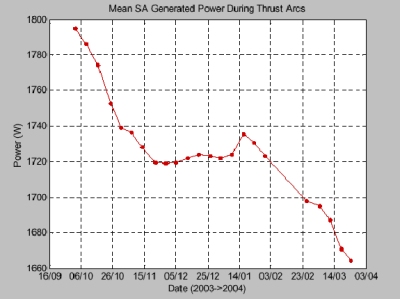 Allowing for operational margins this means the electric propulsion drive will have to be throttled down during the period mid May to mid August 2004. Initial analysis suggests that the extent of the throttle down will not have to be deep, perhaps 50W less than the 1417W maximum nominal power set programmed, depending upon the margin chosen. This will not affect the mission timeline since thrust arc lengths can be increased to compensate for the reduced power availability.

The ESOC specialists periodically compute the osculating orbital elements. These elements define the so-called “osculating orbit” which would be travelled by the spacecraft if at that instant all perturbations, including EP thrust, would cease. It is, therefore, an image of the situation at that epoch. In reality, the path travelled by the spacecraft is a continuous spiral leading from one orbit to another. The most recent osculating elements are as follows: 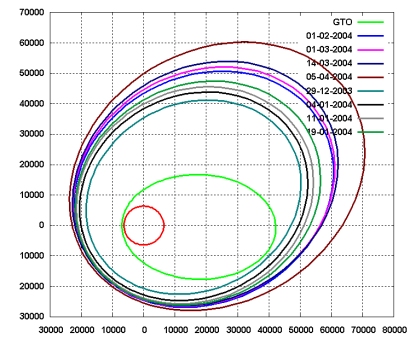 Displayed in the plot are the osculating orbits at launch (GTO) and at different times throughout the mission. The latest orbital plot shows a substantial increase due to the reignition of the ion propulsion system. The apogee height has been dramatically increased due to the current perigee thrusting strategy. The size of the orbit has now more than doubled since launch. Since the start of the mission the electric propulsion engine has changed the orbital parameters as follows: