While approaching its final operational orbit around the Moon, SMART-1 interrupted the Electric Propulsion operations on Monday 10 January 2005. The reason for this delay before reaching the target orbit is to estimate the remaining fuel and plan accurately for a mission extension.

The nominal mission duration is six months from the end of January until the end of July 2005. Shortly after this time, due to perturbations caused by the Earth’s gravity, the orbit will become unstable and the spacecraft would spiral down to the surface unless an orbit re-boost is performed. The Xenon fuel remaining, after the final orbit has been reached, is estimated by the Flight Control Team at ESOC based on three different methods:

Since there will be a residual amount of 1.8 kg of Xenon that will not be usable, the remaining fuel in the worst case scenario will be less than 5 kg at the start of the nominal mission (and also at the end, since during the nominal science operations there is no consumption of Xenon). A re-boost manoeuvre consumes about 4 kg of fuel, and efforts are underway to optimise it in order to obtain the longest possible duration with the minimum fuel consumption.

The EP operations are expected to resume on 18 January. They will last for about ten days until the final operational orbit is reached.

This mosaic view of Pythagoras is composed of images taken by the AMIE camera during two successive orbits on 29 and 30 December 2004 from an altitude of ~ 4000 km.

The following osculating orbital elements have been recently determined by a tracking campaign.

The diagram below shows the SMART-1 osculating orbit at several dates during the spiralling in to the final operational orbit. On 9 January the orbital period was slightly more than 8 hours and the orbital inclination reached 87.9°. The argument of perilune was at 289°, which means that the lowest altitude was in the Moon’s southern hemisphere at about 72° latitude. 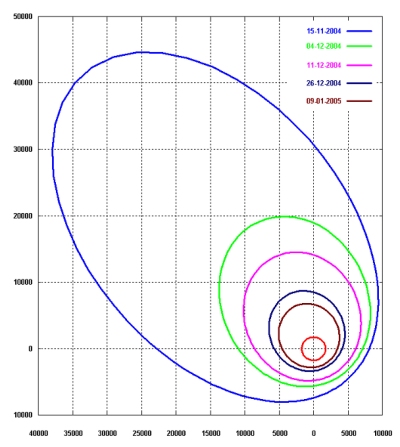