Sentinel-1B in position for liftoff 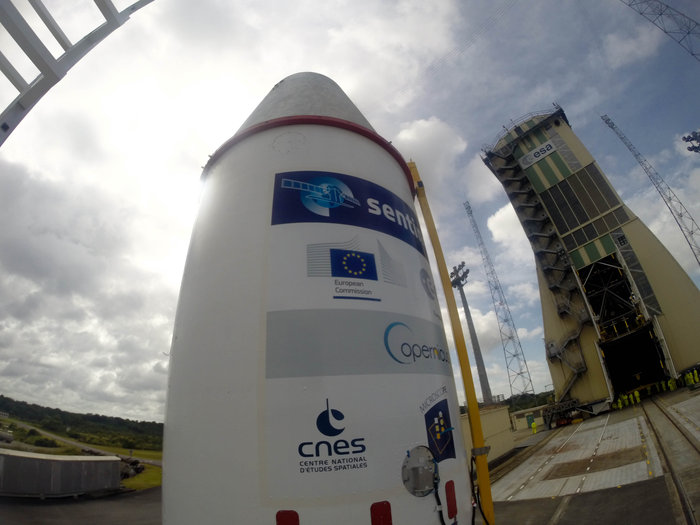 With just two days to liftoff, the next Sentinel for Europe’s environmental monitoring programme in now poised high in the launch tower at Europe’s Spaceport in Kourou, French Guiana.

A Soyuz rocket will loft Sentinel-1B into orbit on 22 April at 21:02 GMT (23:02 CEST). Other smaller satellite passengers are also taking advantage of the ride into space.

The rocket was rolled out to the pad yesterday, followed by the fairing and its precious cargo, which was hoisted up and attached to the top of Soyuz.

With the Sentinel-1 mission designed as a two-satellite constellation, Sentinel-1B will join its identical twin, Sentinel-1A, which was launched two years ago from Kourou.

Both satellites carry a high-resolution radar that images Earth’s surface through cloud and rain regardless of whether it is day or night.

By orbiting 180° apart, global coverage and data delivery are optimised for the Copernicus services.

The mission provides radar imagery for a multitude of services and applications to improve everyday life and understand our changing planet.

For example, Sentinel-1 is being used to monitor Arctic sea ice, survey the marine environment, monitor the land surface for motion risks, and map forests.

Three CubeSats are piggybacking a ride on Soyuz. These small satellites, each measuring just 10×10×11 cm, have been developed by university student teams through ESA’s Fly Your Satellite! effort.

The other passenger is the Microscope satellite from France’s CNES space agency.

The launch rehearsal is being carried out today by teams at ESA’s mission control centre in Germany and in Kourou – a critical milestone before liftoff on 22 April.