By SpaceRef Editor
March 6, 2013
Filed under Earth, polar, The Antarctic Sun, US 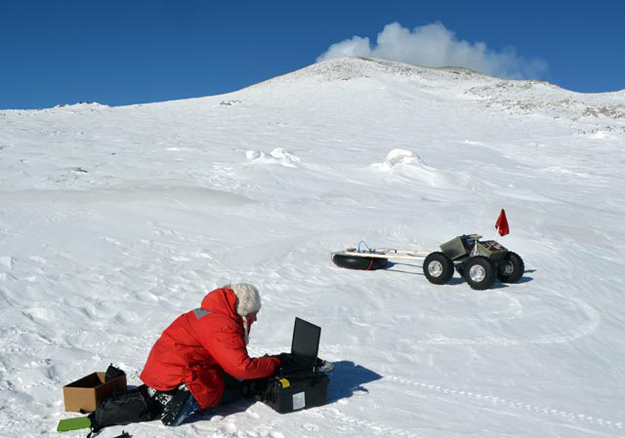 Engineer Rebecca Williams controls Yeti, a four-wheeled robot that carries a ground-penetrating radar, on the slopes of Erebus volcano. Yeti is scanning over an ice cave created by the heat and gases vented by the volcano through fissures. Photo Credit: Peter Rejcek

By Peter Rejcek, Antarctic Sun Editor: Twenty years after an arachnid-shaped robot stalled out on its descent into the noxious crater of an Antarctic volcano, an altogether different rover could be found on the slightly safer slopes of Mount Erebus.

The four-wheeled Yeti rover, towing a rubber tire over the snow-covered flanks of the volcano, is also on a different mission — scanning for ice caves — than its predecessor robot, an eight-legged, mechanized metal explorer dubbed Dante.

The spider-like Dante had been designed under a NASA program, with the intent of one day walking on the moon or Mars. Antarctica is a relatively convenient analog for the otherworldly weirdness that might exist in the cosmos.

The National Science Foundation (NSF), which manages the U.S. Antarctic Program (USAP), facilitated a trip to the Ice for Dante during the 1992-93 austral summer field season. The plan called for the robot to walk and rappel its way into the crater of Erebus, which boasts a rare magma lake inside. Unfortunately, Dante only picked its way down the steep incline about eight meters before a fiber optics communications cable broke and ended the experiment.

Pint-size compared to the Tolkien-esque giant spider that visited Erebus two decades ago, Yeti bears no resemblance to its namesake of legend. Tipping the scales at only about 80 kilograms, the all-terrain robot is autonomous, so no cabled tether to foul or break. It has already proven its toughness in the cold, with previous deployments to both Antarctica and Greenland.

Still, this is the first time that Yeti and its handler, Rebecca Williams, an engineering graduate student at Dartmouth College, have been to a volcano. Williams and the rest of the team at Dartmouth’s Thayer School of Engineering, led by professor Laura Ray, had designed and built Yeti for an altogether different purpose.

“We didn’t consider anything like this. He was developed solely for crevasse detection,” Williams explains in slightly labored breaths as she sets up her laptop in the clear but cold afternoon at about 3,400 meters. “We didn’t think there was another application.”

Yeti and its ground-penetrating radar (GPR), located in the rubber donut hole that it pulls, is normally employed to find empty spaces hiding just below the snow surface. In Greenland, it has served as a sort of scout for a tractor train that moves cargo and fuel across the ice sheet in support of Arctic research.

In Antarctica, Yeti has traveled as far as the geographic South Pole, where it surveyed the site of an old research station that had become buried under the ice over the last half-century or so. Hidden, crevasse-like holes above the crumpled buildings had created a hazard that station personnel had hoped to remedy with a few well-placed explosions to collapse the snow. Exerting a light ground pressure across its four wheels, Yeti was sent in to sniff out any remaining hazards with the GPR.

On Erebus — where researchers have studied the volcano for 40 years under principal investigator Philip Kyle of New Mexico Tech — Yeti has an altogether different objective: Map out the steam-carved structures that riddle the slope around the volcano’s crater.

The ice caves on Mount Erebus are attracting increasingly more scientific attention. It’s not just volcanologists who are rappelling into this subterranean world to learn about such things as the volcano’s chemical flatulence through fissures on its flanks. Biologists are interested in what sort of microbial life might exist in these discrete environments, which are much warmer and far more humid than the frigid, wind-sculpted surface.

In fact, the NSF has instituted a moratorium on entering the ice caves except for certain research purposes — and then only with strict environmental controls — in response to possible contamination. Scientists are currently developing long-term protocols for ice cave research.

Yeti’s noninvasive radar scans of the ice caves offer an alternative way to study the structures without risking their possible biological values.

“We have a general idea of where caves might be. This is a noninvasive way of finding new caves,” notes Drea Rae Killingsworth, a graduate student at New Mexico Tech under Kyle.

Killingsworth has spent the last two summer seasons using LIDAR to make high-resolution maps of both the interior and exterior of several Erebus ice caves. The technique measures the morphology of the ice and rock by analyzing the backscattered light from the laser.

The scans can reveal how the caves change from year-to-year, she explains.

“There are rooms that collapse. The [entrances] can change drastically year from year,” says Killingsworth, a former pastry chef who owned a restaurant before returning to school to work in geology and volcanology. (A pile of rich chocolate-chip cookies in the team’s main field camp building attests that she hasn’t entirely abandoned her former craft.)

Killingsworth notes that the Yeti project on Erebus is truly collaborative. The volcanologists learn more about the ice cave structure and extent, while Williams and her colleagues at Dartmouth can validate their programming and data collection for the robot.

“There aren’t many places where you can do GPR and then go underneath and look to see if you’re right,” says Killingsworth, who is helping Williams run her surface surveys with Yeti over the well-known Warren Cave on a rare cloud-free morning. “For us, she can look at caves that we can’t get into. … We could be missing more than 50 percent of the cave just because we can’t access it.”

Williams agrees. “We have so much data. It’s really kind of rare that you get some much ground truth, so much redundancy, that you can check all of your measurements with.”

Yeti’s simplicity is part of its strength. It only requires six lightweight lithium batteries. The military-grade batteries provide 48 volts, enough to keep the robot rolling for several hours at a time. A radio antenna receives instructions from Williams’ laptop, which she can use to manually drive Yeti using the arrow keys. The rover is also capable of working automatously using pre-programmed routes.

It took about a day to program the robot for its mission to ensure it avoided the thinnest sections of the ice cave roof — about 10 centimeters thick. The humans accompanying Yeti on its survey stay to the marked perimeters.

“We were worried about Yeti, because we were wondering how we’d get him back if he fell in a hole,” Killingsworth says. “It’s always beautiful and fun out here, but there are always interesting challenges to try and get what you need to get done, done.”

Yeti seems unperturbed by all the fuss, as it rolls across the bumpy snow surface. No falls. No spin-outs in deep snow. The rover drives along at a few kilometers per hour, occasionally stopping, and then backing up before it begins a new scan of the surface.

“You can make such tight survey lines with Yeti that you can get really close spacing of the data and reconstruct it three-dimensionally,” says Williams, whose thesis work has involved creating an algorithm to enable Yeti to analyze and react to the data it collects in real time. Currently, such analysis still requires a human being.

For Kyle, who has overseen the Mount Erebus Volcano Observatory over all four decades of its existence, the Yeti project is yet another example of the versatile research that is possible on the world’s southernmost active volcano.