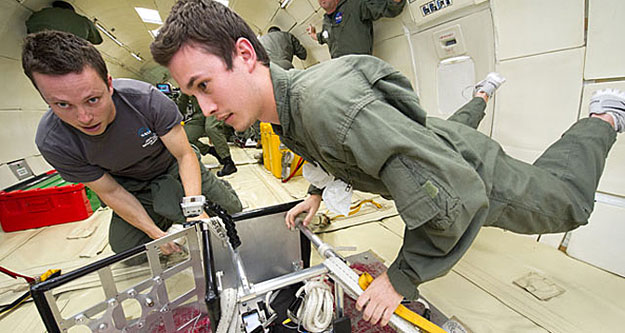 Researchers use these parabolic flights to test their technologies and science experiments to obtain preliminary data on how the experiments react in the various atmospheres before they are launched to the International Space Station or deep space.

“I was on the ground for the first flight Aug. 25 and learned of Armstrong’s death while the aircraft was airborne,” said Christopher Baker of the Flight Opportunities Program Office at NASA’s Dryden Flight Research Center. “Midway through the second flight it was suggested that we make the final parabola of the campaign a lunar gravity parabola in tribute to Neil. It seemed like a fitting gesture and our onboard experimenters agreed.”

“I recall ‘sharing’ the experience of the lunar landing with Neil Armstrong as it happened via the broken audio and grainy video from the surface of the moon,” recalled John “Jack” Connolly of ASRC Research and Technology Solutions at NASA’s Ames Research Center in Northern California. “Some years later, I had the opportunity to meet Armstrong in person and share a brief personal conversation.

“Then just this last week, I was able to honor his moon mission by sharing the experience of a few moments of lunar gravity with a group of dedicated NASA personnel and space researchers,” he added. “My thanks to Neil, if I may be so personal, for sharing his accomplishments with us all.”

The Apollo program used parabolic flights to test and evaluate equipment and procedures in simulated lunar gravity, which is one-sixth that of Earth. Proving these early technologies here on Earth expands the ability to test and retest if needed before a new technology is launched into space.

Neil Armstrong used these type of flights to tests some of the technologies that went into the development of the Lunar Lander that brought him and fellow Apollo 11 astronaut Buzz Aldrin to the Moon.

“I have often thought what it must have been like to walk on the moon every time we do lunar-G flights,” said Dominic Del Rosso of the Reduced Gravity Office at NASA’s Johnson Space Center, Texas. “The feeling is a little surreal, and having performed those G levels in various spacesuits over the years, I figure I have gotten as close as anyone really can.”

Del Rosso said he had met Neil Armstrong twice and had never forgotten those experiences. He first met him as a recent college graduate at an engineering day at Johnson Space Center in the early 1990’s. His next encounter was on Feb. 12 this year at the Next Generation Suborbital Conference in Palo Alto, Calif., where Del Rosso was both a speaker and panelist. Neil Armstrong had delivered the keynote speech at the conference.

“I joked at the time that after riding in the elevator with him and his wife, that I finally got to fly backseat with Neil Armstrong since he pressed the elevator buttons,” said Del Rosso.

He added that this last flight for Armstrong was the saddest that he had ever flown, noting that Armstrong was a truly humble man who was not cocky or arrogant. Del Rosso said Armstrong was always approachable, even to a fresh-out-of-college student, despite Armstrong being an American hero.

One of the experiments flown during the parabolic flight that was dedicated to Armstrong tested five different technologies developed by the University of Alabama at Huntsville (UAH) that are slated to fly into orbit on ChargerSat-1, a CubeSat, according to UAH student researcher Eric Becnel.

“This experiment was a chance to demonstrate the functionality of these technologies and measure some key sensors to better understand these technologies while being in an environment as close to the free space environment as possible,” said Becnel. “We got to deploy our experiment, measure the effects of (of reduced gravity on it), and see the hardware in action. This test was a great chance to see that the work we have done as students is really coming together as we planned and is getting close to flying in space.”

The flights are funded by NASA’s Flight Opportunities Program, which seeks to provide low-cost access to suborbital space environment, where researchers can expose technologies to brief periods of weightlessness in a reduced gravity environment using commercial space rockets, aircraft and high-altitude balloons.

NASA is encouraging the growth of this emerging suborbital space industry through frequent flights at the edge of space and beyond to advance technologies that benefit space exploration.