Public Invited to Send Names & Messages to Asteroid on Hayabusa 2 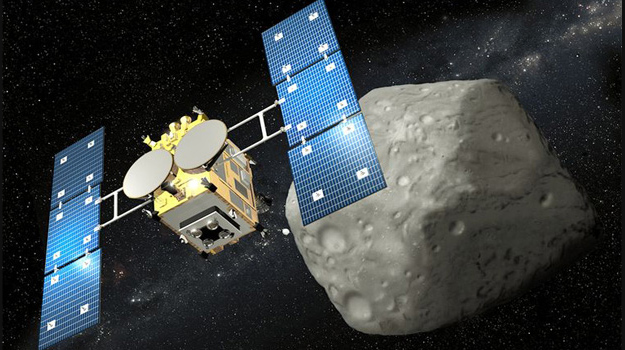 The Japan Aerospace Exploration Agency (JAXA) is scheduled to launch the asteroid explorer “Hayabusa2” [Note 1] on the H-IIA Launch Vehicle in 2014. The Hayabusa2 will arrive at an asteroid in 2018 to investigate it for one and half years, before returning to Earth in 2020.

JAXA will record and load your names, messages and illustrations on onboard devices (the target marker [Note 2] and re-entry capsule [Note 3]) of the Hayabusa2. Through this campaign and Hayabusa2’s six-year space mission, we would like people to deepen their understanding of Japan’s space probe activities. The following is the campaign outline.

3. Campaign items Names, messages, collection of messages, and illustrations recorded and loaded onto the onboard devices of the Hayabusa2 (Target marker [2] and Re-entry capsule [3])

4. How to apply Please refer to the following JAXA website: http://www.jspec.jaxa.jp/e/hottopics/20130329.html

[1] The asteroid explorer “Hayabusa2” is a successor to the asteroid explorer “Hayabusa,” which returned to Earth in June 2012. The Hayabusa2 will challenge a sample return mission by bringing sand from an asteroid to elucidate the origin and evolution of the solar system and raw materials of life while leveraging technology and experience acquired through the Hayabusa. For the Hayabusa2 project outline and mission overview, please refer to the following site: http://www.jaxa.jp/projects/sat/hayabusa2/index_e.html