The purpose of the week is to designate a period of time in which everyone (civil service and contractor employees) across the Agency can engage in a dialogue on the lessons to be learned from the CAIB Report. This is not meant to be a stand down week, instead discussions will be held as a part of regularly scheduled meetings (e.g. staff meetings). 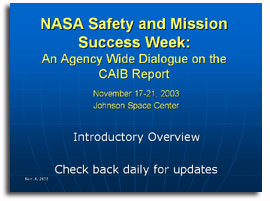 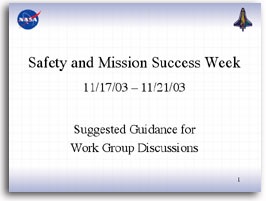 “The Columbia Accident Investigation Board (CAIB) Report Recommendations, Observations, and Findings provided NASA with insight that is
enabling us to produce a guide for moving forward, not only with the Return to Flight effort, but also in areas that impact other parts of the
Agency.

The Team conducted a comprehensive review of the CAIB Report R-O-Fs and identified a subset of those that have implications beyond the
Shuttle Program. A determination was made for each R-O-F as to its NASA-wide applicability. If the item directly dealt with safety,
management, organization, engineering, policy, or communication as an
Agency issue, then it was deemed to have broad NASA applicability. In the
judgment of the Diaz Team, when there was indirect item applicability, but
known programs outside of human spaceflight in which the particular R-O-F
could be applied, then that item was also deemed to have broad NASA
applicability. Individual organizations may determine that additional R-O-Fs
apply to them. This will be especially true for programs that conduct aircraft
operations or support development of new aerospace vehicles (e.g., Orbital
Space Plane). These organizations are encouraged to address the additional
R-O-Fs in the same way that the Diaz Team, Return To Flight (RTF) Team
and Continuing Flight Team (CFT) have done.” (Source: CAIB Agency Wide Action Matrix)