Photo: Volcanoes in central Kamchatka As Seen From The Space Station 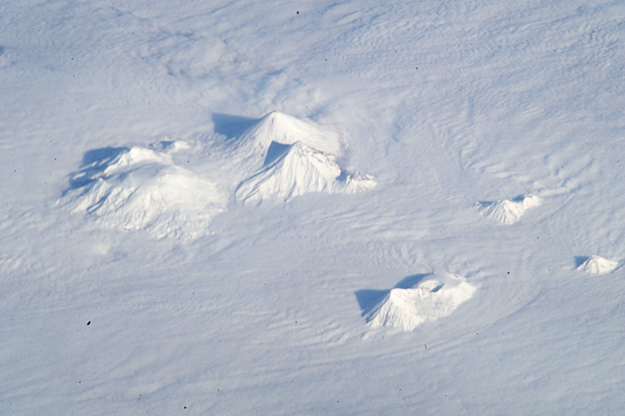 Volcanoes in central Kamchatka are featured in this image photographed by an Expedition 33 crew member on the International Space Station. The snow-covered peaks of several volcanoes of the central Kamchatka Peninsula are visible standing above a fairly uniform cloud deck that obscures the surrounding lowlands.

In addition to the rippled cloud patterns caused by interactions of air currents and the volcanoes, a steam and ash plume is visible at center extending north-northeast from the relatively low summit (2,882 meters above sea level) of Bezymianny volcano. Volcanic activity in this part of Russia is relatively frequent, and well monitored by Russia’s Kamchatka Volcanic Eruption Response Team (KVERT). The KVERT website provides updated information about the activity levels on the peninsula, including aviation alerts and webcams.

While the large Tobalchik volcano to the southwest (bottom center) is largely formed from a basaltic shield volcano, its highest peak (3,682 meters above sea level) is formed from an older stratovolcano. Tobalchik last erupted in 1976. While this image may look like it was taken from the normal altitude of a passenger jet, the space station was located approximately 417 kilometers above the southeastern Sea of Okhotsk; projected downwards to Earth’s surface, the space station was located over 700 kilometers to the southwest of the volcanoes in the image. The combination of low viewing angle from the orbital outpost, shadows, and height and distance from the volcanoes contributes to the appearance of topographic relief visible in the image. ISS033-E-018010 (3 Nov. 2012) – high res (0.6 M) low res (52 K)