Photo: Volcanic Activity in the Red Sea And Birth of a New Island 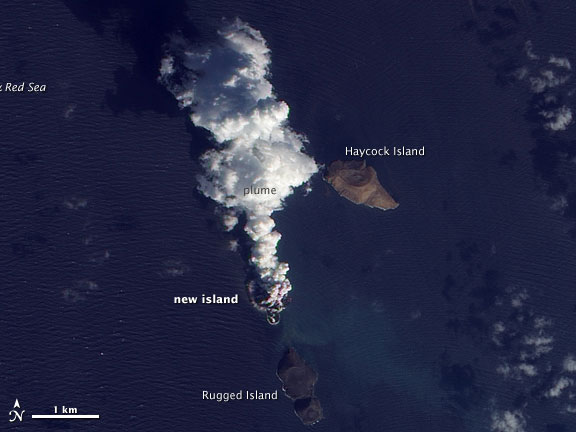 The activity in the Red Sea included more than an eruption. By December 23, 2011, what looked like a new island appeared in the region. The Advanced Land Imager (ALI) on NASA’s Earth Observing-1 (EO-1) satellite captured these high-resolution, natural-color images on December 23, 2011 (top), and October 24, 2007 (bottom). The image from December 2011 shows an apparent island where there had previously been an unbroken water surface. A thick plume rises from the island, dark near the bottom and light near the top, perhaps a mixture of volcanic ash and water vapor.

The volcanic activity occurred along the Zubair Group, a collection of small islands off the west coast of Yemen. Running in a roughly northwest-southeast line, the islands poke above the sea surface, rising from a shield volcano. This region is part of the Red Sea Rift where the African and Arabian tectonic plates pull apart and new ocean crust regularly forms.