Photo: Sunglint and clouds off Western South America As Seen From Space

By SpaceRef Editor
May 29, 2012
Filed under Earth, Earth Science, NASA HQ, US 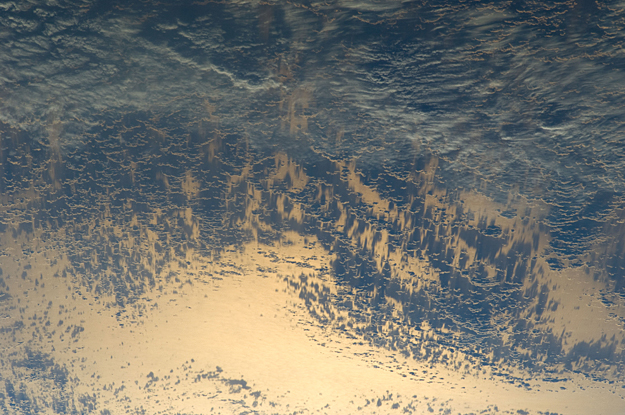 Sunglint and clouds off Western South America are featured in this image photographed by an Expedition 31 crew member on the International Space Station. The setting sun highlights cloud patterns above the Pacific Ocean, as well as the ocean surface itself in this impressive image. The space station was located over the Andes Mountains of central Chile at the time. The view is looking towards the Pacific Ocean and the sun setting in the west (towards lower left).

Light from the setting sun reflects off the water surface towards the observer on the space station and creates a mirror-like appearance – a phenomenon known as sunglint. Bands of relatively low altitude cumulus clouds appear much like a flotilla of ships with their west-facing sides illuminated by the waning sunlight and the rest in shadow (center). Due to the low sun angle, they cast long and deep shadows over large swaths of the ocean surface. Given the short camera lens used, an individual cloud shadow may extend for miles. Light gray clouds at upper right appear to be at a higher altitude.