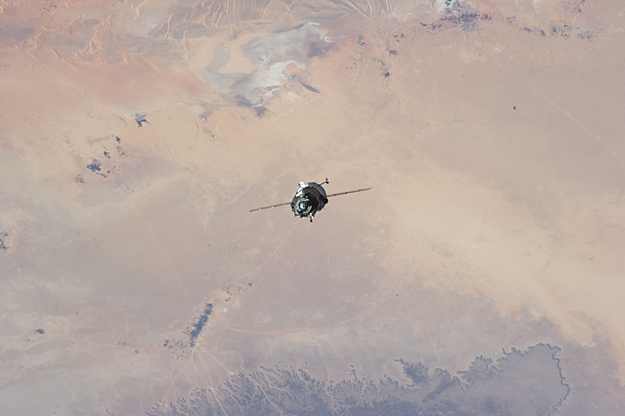 As the International Space Station and Soyuz TMA-07M spacecraft were making their relative approaches on Dec. 21, one of the Expedition 34 crew members on the orbital outpost captured this photo of the Soyuz backdropped by the Sahara Desert. Inside the arriving spacecraft were astronaut Chris Hadfield of the Canadian Space Agency, cosmonaut Roman Romanenko of Russia’s Federal Space Agency and NASA astronaut Tom Marshburn. The image center is at 31.7 degrees north latitude and 2.0 degrees east longitude, on the south side of the Atlas Mountains and on the northern margin of a huge dune field known as Grand Erg Occidental, located in north central Algeria. ISS034-E-009924 (21 Dec. 2012) – high res (0.6 M) low res (48 K)