Photo of Earth from Space: Electric Blue Blooms Around Ireland

Plankton, the most abundant type of life found in the ocean, are microscopic marine plants that drift on or near the surface of the sea.

Plankton have been called ‘the grass of the sea’ because they are the basic food on which all other marine life depends.

Plankton are able to convert inorganic compounds such as water, nitrogen and carbon into complex organic materials. With their ability to ‘digest’ these compounds, they are credited with removing as much carbon dioxide from the atmosphere as vegetation on land.

While individually microscopic, the chlorophyll they use for photosynthesis collectively tints the surrounding ocean waters, providing a means of detecting these tiny organisms from space with dedicated ‘ocean colour’ sensors, like Envisat’s Medium Resolution Imaging Spectrometer (MERIS). 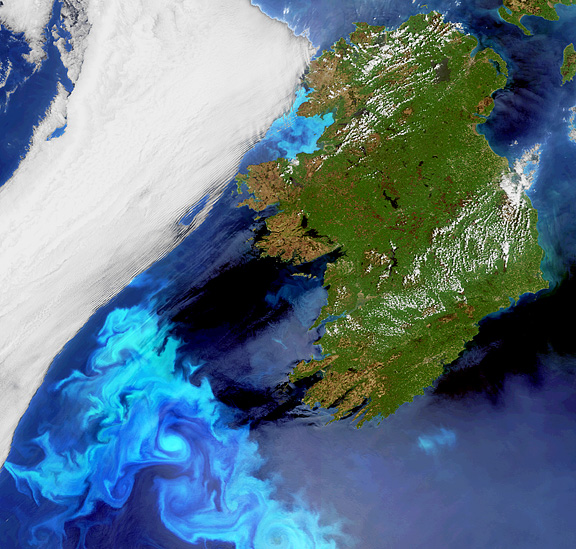 The island of Ireland comprises the Republic of Ireland (covering five-sixths of the island to the south) and Northern Ireland (top eastern corner). The island’s brown rugged cliffs along the west coast stand in contrast to the green lush lowlands of its interior.

Ireland has some 14 000 km of inland waterways along with some 800 lakes. The large dark blue lake seen in Northern Ireland is Lough Neagh, the island’s largest lake with an area of 392 sq km.

Located some 30 km east of the lake is Northern Ireland’s capital city of Belfast. Dublin, the capital of the Republic of Ireland, is located on the east coast (covered by clouds). The Irish Sea, a portion of Scotland (top) and the Isles of Man (top right) are visible to the east of Ireland.

MERIS acquired this image on 23 May at a resolution of 300 m.