Photo: Lake Powell and the Rincon As Seen From Orbit

By SpaceRef Editor
May 22, 2012
Filed under Earth, Earth Science, NASA HQ, US 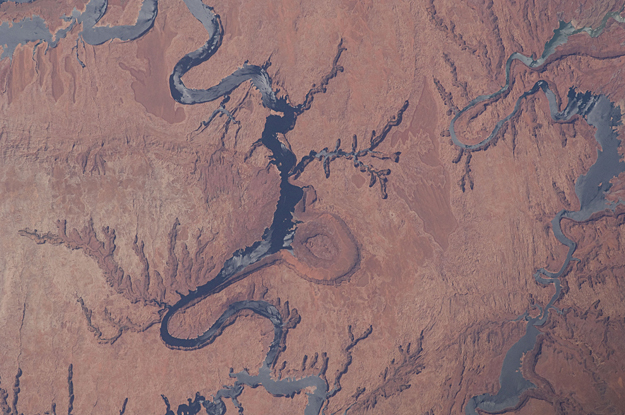 Lake Powell and the Rincon in Utah are featured in this image photographed by an Expedition 31 crew member on the International Space Station. This photograph highlights part of Lake Powell; the lake extends across southeastern Utah and northeastern Arizona. Lake Powell started filling in 1963 when the Glen Canyon Dam on the Colorado River in Arizona was completed, and Glen Canyon flooded. The serpentine water surface of the reservoir-highlighted by gray regions of sunglint-follows the incised course of the canyon.

Today Lake Powell is part of the Glen Canyon National Recreation Area which extends for more than 186 miles along the shoreline and side canyons. The primary intended use of Lake Powell’s water is support of agricultural production, with a small portion allocated to urban use in Arizona, Nevada, and California. The reservoir did not reach its maximum capacity of 27 million acre-feet until 1980. More recently, extended drought conditions in the southwestern United States over the past decade have resulted in a significant lowering of the Lake water level and emergence of parts of Glen Canyon. Should average precipitation in the Colorado River watershed lessen (as predicted by regional climate change models), that could result in further lowering of the Lake Powell water level and changes to the current water management plans.

Fluctuations in water levels and change of river courses are a common occurrence seen in the geologic record of rivers. Looking somewhat like a donut or automobile tire from the vantage point of the space station, the Rincon (center) is an entrenched and abandoned meander, or loop, of the Colorado River, thought to have formed several thousand years ago when the river cut straight across the ends of the loop and shortened its course by six miles. The resulting canyon and 600 — 750 feet-high central mesa indicate where the river used to flow. The term “Rincon” also is used by geomorphologists to describe similar ancient river features observed elsewhere. The Goosenecks of the San Juan River are an example of an active entrenched meander. ISS031-E-006398 (30 April 2012) — high res (1.8 M) low res (87 K)