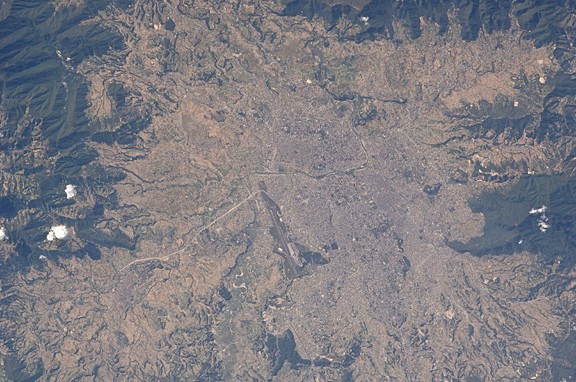 Kathmandu, Nepal is featured in this image photographed by an Expedition 25 crew member on the International Space Station. The capital and largest city of Nepal, Kathmandu occupies much of the Kathmandu Valley located near the center of the country. Nepal itself contains much of the Himalaya mountain range between China (Tibet) to the north and India to the south. Geological and fossil evidence indicates that the Kathmandu Valley was filled by a large lake (Paleo-Kathmandu Lake) between approximately 2.8 million and 10,000 years ago, according to scientists.

Geologists believe the lake drained in phases over time due both to a drier regional climate, continuing tectonic uplift and faulting in the region, and formation of an integrated valley drainage system as river channels cut through previous natural rock ridge dams. The green vegetated slopes that ring the Kathmandu metro area (light gray, center) include both forest reserves and national parks. The metropolitan area is relatively flat compared to the surrounding high mountains. Tribhuvan International Airport, located near the current eastern margin of the metro area, is the only international airport in Nepal. Archeological evidence suggests that the development of Kathmandu, together with the nearby “sister cities” of Lalitpur and Bhaktapur, began almost 2,000 years ago.

Today, Kathmandu and its sister cities form the governmental, cultural, and—as a main access point to the Himalayas for tourism—economic center of the country. high res (2.2 M) low res (100 K)