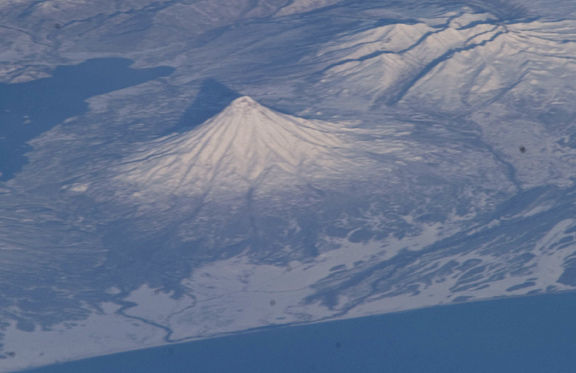 This image also illustrates one of the unique attributes provided by the ISS — the ability to view Earth landscapes at an angle, rather than the “straight down” view typical of many orbital satellite-based sensors. This oblique view, together with shadows cast by the volcanoes and other mountains provides perspective about the setting and a sense of topography of the region, especially highlighting the symmetrical cones of Kronotsky (center) and Kizimen (top right) stratovolcanoes. Kizimen Volcano last erupted in 1928, while Kronotsky Volcano-one of the largest on the peninsula-last erupted in 1923.

Schmidt Volcano, located to the north of Kronotsky, has the morphology of a shield volcano and is not known to have erupted during the period of historical record. To the south of Kronotsky is Krasheninnikov Volcano, comprised of two overlapping stratovolcanoes that formed within an earlier caldera. Scientists believe Krasheninnikov may have last erupted in 1550. The two summit craters of the stratovolcanoes are clearly visible in this image (lower left).

Lake Kronotsky (left) is Kamchatka’s largest lake; it was formed when lava flows from Kronotsky Volcano dammed the Listvenichnaya River. The Kamchatka Peninsula lies along the so-called “Ring of Fire” in the Pacific Ocean. The Ring of Fire is characterized by the presence of active volcanoes and frequent earthquakes; these are associated with the many active subduction and transform boundary zones that ring the Pacific tectonic plate. According to scientists, there are currently 114 volcanoes identified on the Kamchatka Peninsula that have erupted during the Holocene Epoch (approximately 12,000 years ago to the present). high res (0.7 M) low res (61 K)