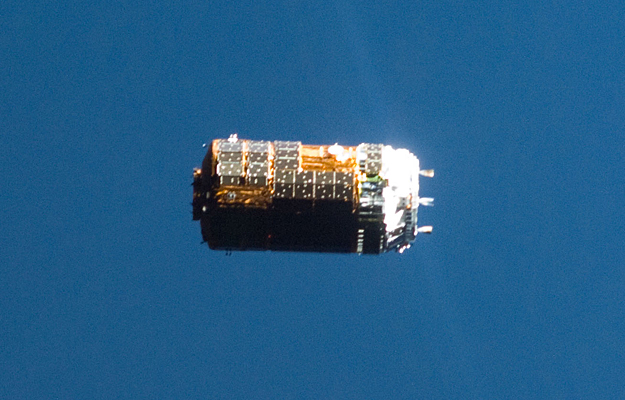 The unpiloted Japan Aerospace Exploration Agency (JAXA) H-II Transfer Vehicle (HTV-3) approaches the International Space Station. The Japan Aerospace Exploration Agency launched HTV-3 aboard an H-IIB launch vehicle from the Tanegashima Space Center in southern Japan at 10:06 p.m. EDT July 20 (11:06 a.m. July 21, Japan time). The HTV is bringing 7,000 pounds of cargo including food and clothing for the crew members, an aquatic habitat experiment, a remote-controlled Earth-observation camera for environmental studies, a catalytic reactor for the station’s water regeneration system and a Japanese cooling water recirculation pump. The vehicle will remain at the space station until Sept. 6 when, like its predecessors, it will be detached from the Harmony node by Canadarm2 and released for a fiery re-entry over the Pacific Ocean.ISS032-E-009997 (27 July 2012) – high res (1.4 M) low res (34 K)