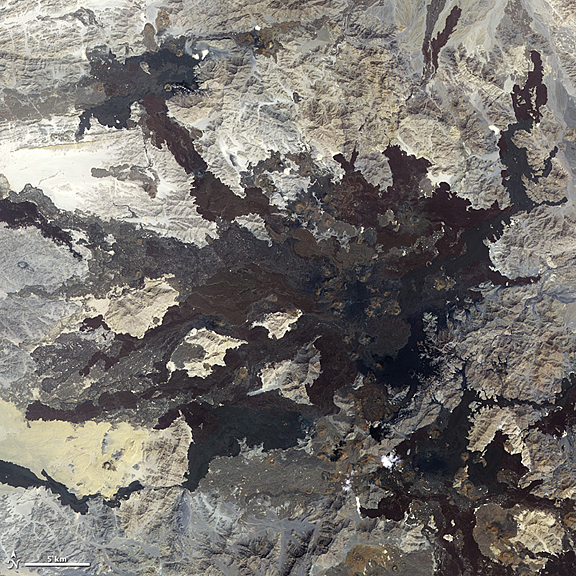 In northwestern Saudi Arabia, east of the Red Sea port city of Umm Lajj, lies a field of volcanic lava. Known as Harratt Lunayyir, the lava field contains some 50 cones from volcanic activity in the past 10,000 years (the Holocene Epoch). Although one of the volcanic cones may have erupted as recently as the tenth century AD, scientists long believed the region to be geologically quiet. A seismic swarm in 2009 suggested otherwise.

The Advanced Spaceborne Thermal Emission and Reflection Radiometer (ASTER) on NASA’s Terra satellite captured this false-color image of Harratt Lunayyir on October 8, 2006. The image is made from a combination of infrared and visible light. Old lava flows appear as irregular, dark stains on an otherwise light-colored landscape. Like ink on an uneven surface, the lava has formed rivulets of rock that flow out in all directions.

Between April and June 2009, a swarm of more than 30,000 earthquakes struck this region. Although most of the quakes had very low magnitudes, 19 reached magnitude 4 or greater and a 5.4-magnitude quake damaged buildings in a nearby town. Concerned about the potential for a larger quake or volcanic eruption, Saudi officials evacuated roughly 40,000 residents. By August 2009, the seismic activity subsided and residents were allowed to return.

The quakes at Harratt Lunayyir opened a crevice roughly 5 miles (8 kilometers) long, and researchers warn that future eruptions are possible. The lava field lies about 120 miles (200 kilometers) from the tectonic spreading center under the Red Sea. Magma can rise along the margins of such areas, however, according to the U.S. Geological Survey.