Photo: Fires in the Wyoming Range As Seen From Space 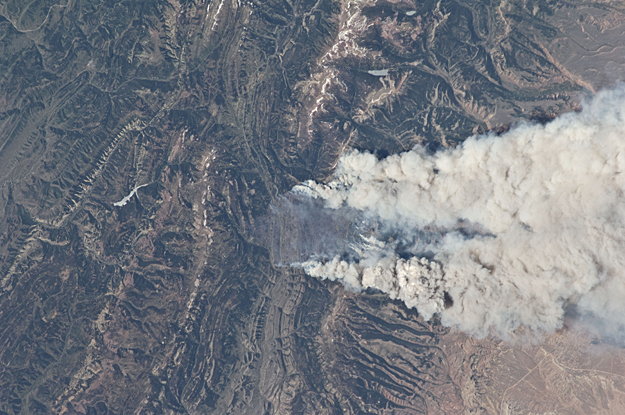 An Expedition 31 crew member aboard the International Space Station, flying approximately 240 miles above Earth, recorded a series of images of the current wild fires in the southwestern United States. These particular fires, of unknown cause, are burning at the south end of the Wyoming Range in southwestern Wyoming, and have affected 17,000 acres.

The fires have produced two major smoke plumes (center) that dominate the image. The fires are occurring 120 miles due south of Yellowstone Lake which appears as an irregular blue shape (upper right –if the image is oriented with north toward the top right corner). Utah’s Great Salt Lake (image far left) is about 120 miles away. Winds transport the smoke in a northeasterly direction: the plumes can be seen to cross the Wind River Range (center), blowing directly toward the Big Horn Mts., which appear as a dark, curved feature (lower right).