Photo: Erupting Fissure at Tolbachik As Seen From Space 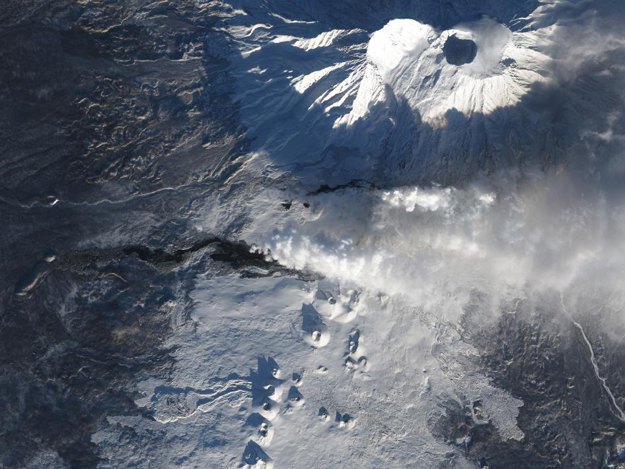 After more than a month of eruption, lava continues to flow from Tolbachik, one of many active volcanoes on Russia’s Kamchatka Peninsula. The current eruption at Tolbachik began on Nov. 27, 2012. Lava flowed up to 20 kilometers (12 miles) from a line of fissures on the volcano’s southern flank. Since then, some of the lava has cooled enough to allow snow to accumulate. Snow-covered lava flows appear gray in this natural-color satellite image. Fresher lava appears black. A faint orange glow at the head of the northern flow marks the location of an erupting fissure. The image was collected on Dec. 22, 2012, by the Advanced Land Imager (ALI) on the Earth Observing-1 (EO-1) Satellite. According to the Kamchatka Volcanic Eruption Response Team (KVERT) the eruption continued through Dec. 30, 2012. >See image with detailed labels. Image Credit: NASA Earth Observatory