Photo: Dallas, Texas, As Seen at Night From Orbit 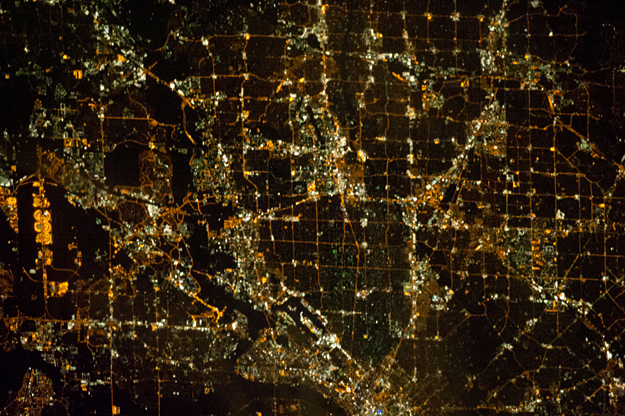 A nighttime view of the Dallas, Texas metropolitan area is featured in this image photographed by an Expedition 33 crew member on the International Space Station. Most metropolitan areas of the western United States are configured over large areas with a regular street grid pattern that is highly recognizable from space, particularly at night.

The northern Dallas metropolitan area exhibits this pattern. The north-south and east-west grid pattern of major surface streets is highlighted by orange street lighting, lending a fishnet-like appearance to the urban area. Within this framework, smaller residential and commercial buildings and streets give green-gray stipple patterns to some blocks. The airplane terminals of Dallas-Fort Worth International Airport are lit with golden-yellow lights, and surrounded by relatively dark runways and fields at left. Likewise, the runways of Dallas Love Field at lower center are recognizable by their darkness. Other dark areas within the metro region are open space, parks, and water bodies.

Dallas is part of the larger Dallas-Fort Worth-Arlington Metropolitan Statistical Area (population 6,526,548 in 2011) as recognized by the U.S. Census Bureau; to most Texans, it is simply “DFW” or “the Metroplex.” Several of the larger urban areas within DFW are visible in this image; Dallas, Garland and Richardson all have populations above 100,000 according to the North Central Texas Council of Governments. While historically the economy of Dallas was based in the oil and cotton industries, today commerce, technology, healthcare, and transportation are the major economic drivers. ISS033-E-021663 (15 Nov. 2012) – high res (2.5 M) low res (135 K)