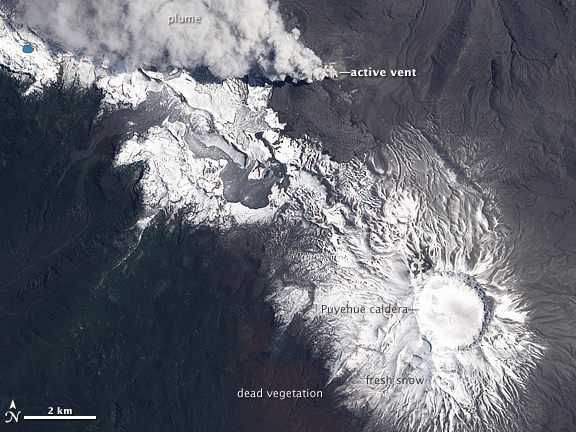 In early June 2011, Chile’s Puyehue-Cordon Caulle Volcano erupted explosively, sending volcanic ash around the Southern Hemisphere. In late December 2011, activity at the volcano had calmed, but volcanic ash and steam continued to pour through the fissure that opened several months earlier. The Advanced Land Imager (ALI) on NASA’s Earth Observing-1 (EO-1) satellite captured this natural-color image on December 23, 2011. The active fissure lies northwest of the Puyehue caldera, and a plume blows from the fissure toward the west and north.

This image shows not just ash but also snow on the volcano surface, including the caldera. Because volcanic ash regularly coats the land surface, the pristine snow probably fell recently. In a bulletin issued December 26, 2011, Chile’s Servicio Nacional de Geologia y Mineria (SERNAGEOMIN) characterized the activity over the previous 24 hours as a minor eruption of low intensity. Reaching an altitude of 2,236 meters (7,336 feet), Puyehue-Cordon Caulle is a stratovolcano, a steep-sloped, conical volcano composed of layers of ash, lava, and rocks released by previous eruptions. This volcano comprises part of the largest active geothermal area in the southern Andes.