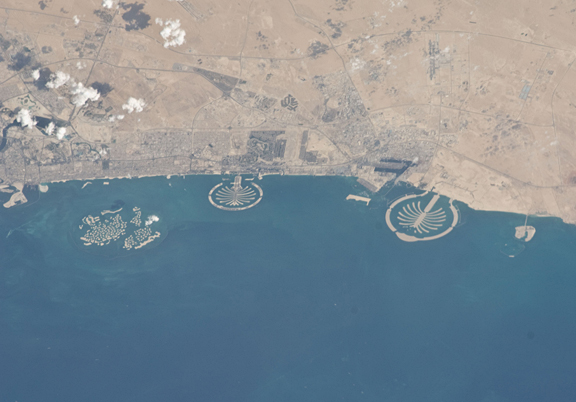 Man-made archipelagos near Dubai, United Arab Emirates, are featured in this image photographed by an Expedition 25 crew member on the International Space Station, flying at 220 miles above Earth.

The municipality of Dubai is the largest city of the Persian Gulf emirate of the same name, and has built a global reputation for large-scale developments and architectural works. Among the most visible of these developments — particularly from the perspective of astronauts onboard the ISS — are three man-made archipelagos. The two Palm Islands — Palm Jumeirah to the left of center, and Palm Jebel Ali, just to the right of center, appear as stylized palm trees when viewed from above.

The World Islands (near left edge) evoke a rough map of the world from an air- or space-borne perspective. The Palm Jumeirah project began in 2001 and required more than 50 million cubic meters of dredged sand to raise the islands above the Persian Gulf sea level. Construction of the Palm Jumeirah islands was completed in 2006; they are now being developed for residential and commercial housing and infrastructure.

Creation of the World Islands was begun in 2003 and completed in 2008, using 320 million cubic meters of sand and 37 million tons of rock for the surrounding 27 kilometer-long protective breakwater. high res (0.9 M) low res (58 K)