Editor’s note: This memo was sent to a large number of Congressional staff.

This memo responds to key points in the published memo of 11 August 2005, to put certain reviews into perspective, and to correct certain misunderstandings about contract activity.

Although the zero-based review was conducted internally at NASA to align the science portfolio with explorative directives, it was prefaced by severe budget restrictions, exclusive applicability to Exploration, and other assumptions (written and unwritten). These conditions precluded high-value developments in favor of massive, short-term budget reductions especially if the activities fell outside of the then “spiral” developments, which applied to all of Space Station. Technology and science managers at NASA Headquarters were directed to “fit within the box.” This type of a review is not zero-based, and forced Headquarters managers to eliminate any high-cost, high-value, and long-term payoff developments so that they could meet annual budget goals. The zero-based review also had little or no external guidance or review. Indeed, the budget and related assumptions were established first and the priorities followed. These facts can be substantiated by those directly and indirectly involved. Relying on this study is misleading and does not provide an objective review of space biological and microgravity science priorities.

With respect to decisions based on previous science reports and the bioastronautics roadmap, many of these science reviews, and in fact the bioastronautics roadmap, identified key human health science priorities that recommended using the Space Station as the primary means of investigation. Shown below in Table 1 is an excerpt from the Bioastronautics Roadmap for Exploration. In addition, many of the human health issues required animal investigations to increase the knowledge and understanding of the human health issues in support of countermeasure development and validation. NASA’s own chief scientist has indicated internally the need for such animal research in key human health areas as quoted below.

Solutions to medical problems have rarely come from human research alone. Using an integrated approach of animal, cell, and human research can accelerate discovery and provide an opportunity to target and optimize the most effective way to use our limited ISS resources, most importantly the crew. This was the opinion of the Medical Policy Board (MPB) subcommittee reviewing the utility of the animal (rodent) research that could be accomplished using the International Space Station (ISS) and Centrifuge Accommodation Module (CAM) …. an integrated research approach to resolving the Biomedical Risks of space flight to humans should be employed. 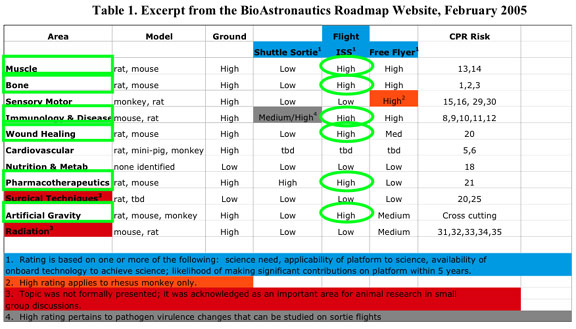 With respect to the contract actions listed, your fourth bullet indicated that “the PRU has not been an active contract for the past two years.” This is absolutely false. Shortly after the remap study in which plant and animal science were raised as some of NASA’s highest priorities and operations on Space Station, the Plant Research Unit was fully engaged and reached PDR status within the first nine months of FY04. In FY05, NASA directed ORBITEC to focus its priorities on the advanced animal habitat, and continue minimal, valuable ground-based science developments. With minimal funding, ORBITEC continued and finalized development of the ground-based science evaluation units and began groundbased science studies with respect to plant and biology for Space Station. This activity also sustained key expertise in the PRU and plant biology capabilities that coordinate the PRU development. In addition, throughout this period, ORBITEC began several outreach programs to coordinate educational activities in K-12 and education beyond high school, including the introduction of Space Garden (a commercial product) and the Biomass Production System for Education. Also in FY05, NASA created a “Hallmark of Success” publication and video on the PRU program touting its success as illustrative of how small business can use the Small Business Innovation Research Program to bridge between initial development and large program implementations of value for NASA.

In summary, your publicized memo of 11 August provides information on a portion of NASA Headquarters’ activity that inaccurately presents some of the contract activities. The Advanced Animal Habitat development, awarded and approved at the Administrator level as late October 2004, is additional evidence that these science priorities still existed in FY05. Please note that both Advanced Animal Habitat and Plant Research Unit can be easily modified for non-ISS platforms and for automated, unmanned operation.

We can only acknowledge that the budget core for a singly focused development of next generation launch capability has been able to eliminate science capabilities and intellectual assets that NASA manages for the nation. These assets provide a base fundamental knowledge necessary for future exploration missions. An exploration program without a significant life science contribution will increase risk of success and preclude opportunities to lower operations costs. The fundamental knowledge has taken decades to build and requires continuity to survive.

The first two documented milestones of exploration were to return the Shuttle to flight and to complete the capabilities of the International Space Station. We are achieving the first, but are very far from achieving the second. In addition the President directed a program as follows: ”

Our first goal is to complete the International Space Station by 2010. We will finish what we have started. We will meet our obligations to our 15 international partners on this project. …we have much to learn about their long-term effects before human crews can venture through the vast voids of space for months at a time. Research on board the station and here on Earth will help us better understand and overcome the obstacles that limit exploration. Through these efforts, we will develop the skills and techniques necessary to sustain further space exploration.”

Other published goals of the exploration program that require life and biological sciences include:

By the President’s own words, exploration is to be a journey, not a race.

We hope that NASA is not making irrational, near-term decisions that break the pipeline of national intellectual capabilities and biological science abilities that make the exploration “journey” more risky and less safe, and provide less opportunity to enhance an affordable exploration journey for the next century. The manner in which drastic cuts are made during Congressional recess and prior to any discussion or reporting on Exploration Plans to Congress certainly sends alarming signals, especially when actions oppose documented desires of Congress.