By SpaceRef Editor
March 12, 2011
Filed under Earth, polar, The Antarctic Sun, US 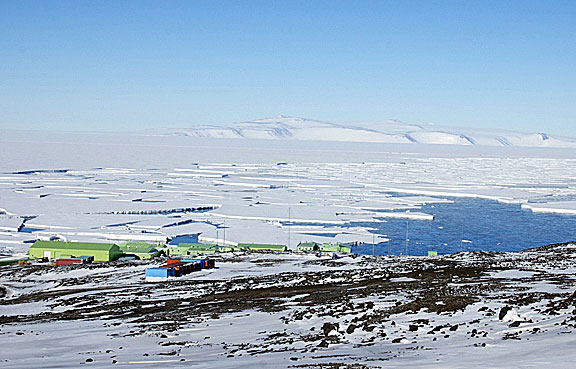 The sea ice in front of New Zealand’s Scott Base breaks apart last week. The station manager reported that open water has not been seen in front of Scott Base since 1998.

Ryan Wallace, McMurdo correspondent If you walk down to where the volcanic dirt of Ross Island meets the sea at the foot of McMurdo Station , you’ll hear a sound not heard there in more than a decade — the peaceful sound of waves crashing on the shore.

The channel that was opened by the Swedish icebreaker Oden from the mouth of McMurdo Sound to the station precipitated a continual widening and release of the ice held fast here for the last 12 years.

In January, one had to walk up above McMurdo to see the small chunks of ice slowly but persistently breaking and blowing away out by the Erebus Ice Tongue and Tent Island. Broken ice became more visible from station proper as the Oden continually drove laps along the channel, breaking an even wider path, while the fuel tanker and annual resupply vessel made their port calls.

All the while, more and more of the sea ice broke apart with the assistance of some strong southerly winds and occasional swells from the north. Before we knew it, the opening of water was extending past McMurdo and out around Cape Armitage, the southern most point of Ross Island.

As the sea ice has blown away, the wildlife has returned.

Emperor penguins have abounded this month, walking freely all along the snow road to Pegasus airfield . Antarctica’s biggest penguin has also been seen molting by the road to Hut Point and the nearby ice pier. On any given day, orcas and minke whales could be seen spy hopping — rising and holdingposition partially out of the water — and swimming around where airplanes landed only four months ago.

Meanwhile, Adelie penguins played on the ice floes beneath Observation Hill, and Weddell seals sprawled in front of New Zealand’s Scott Base found their home among the pressure ridges floating away! 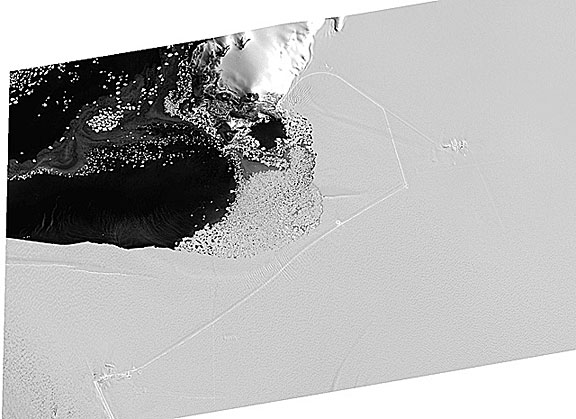 The lines on the ice show the road to Pegasus airfield. Imagery Copyright 2011 DigitalGlobe, Inc. Provided through the NGA Commercial Imagery Program 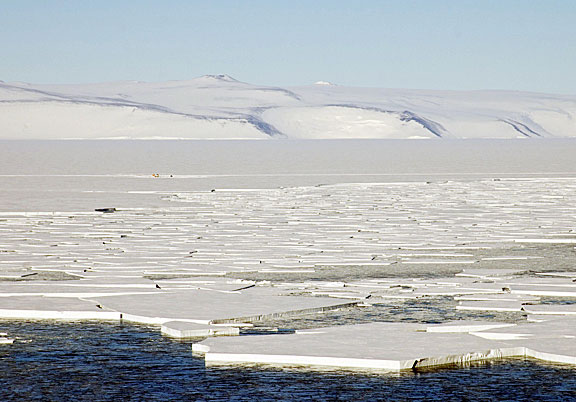 Tabular ice as seen from Scott Base toward the road that leads to Pegasus airfield. Photo Credit: Ryan Wallace

That’s right: Last week, in the calm after a rather fierce storm, designated with our most extreme rating of Condition 1, the winter-over crew of Scott Base stayed up late one night to watch tabular chunks of the ice in front of their station break away and quietly float out to the north. Scott Base station manager Troy Beaumont said they haven’t seen open water there since 1998.

While this has been an exciting development here on Ross Island, it hasn’t necessarily been an altogether convenient one. In the course of just a few days, the extent of the ice breakup reached to within about a thousand feet of the Halfway Fuel Pumphouse on the road to the airfield, with several flights still to go before the end of the summer field season.

On Feb. 24, members of the Fuels department (called “fuelies”) were heading out to the Halfway House to finish breaking down and winterizing the work area. They had just completed “pigging” the 13 miles of fuel lines, a process that involves sending a foam bullet called a “pig” under high pressure to purge the lines of their nearly 100,000 gallons of diesel fuel.

After the storm, upon seeing breaking ice approach so close to their six large winter storage tanks at Halfway House, the fuelies had to scramble into high gear to transfer fuel from those tanks onto tank sleds and bring all of the fuel back to the airfield at Pegasus.

Many fuelies and support personnel worked through the entire night to transfer all of the fuel safely, while a group of emperor penguins sat on a small snow mound nearby and enjoyed the show.

And the cracks just continued to form.

Heavy equipment operators from the Fleet Operations department, working on the Pegasus Road, said they could hear cracking noises under the ice along the road near places where cracks were starting to form. A new two-lane snow road of at least seven extra miles is being proposed to allow for safe passage to and from the airfield. If the plan is approved, it will take the nearly the entire winter for the Fleet Operations crew to complete this task.

Despite the deterioration of the ice near the road, more than 200 people made it safely to the airfield, where they left for Christchurch on two U.S. Air Force flights on Feb. 27 and 28 (local time). Most traveled onward to Auckland aboard special flights operated by the Royal New Zealand Air Force, as rescue efforts continued in New Zealand’s earthquake-stricken city, which serves as the gateway for the U.S. Antarctic Program.