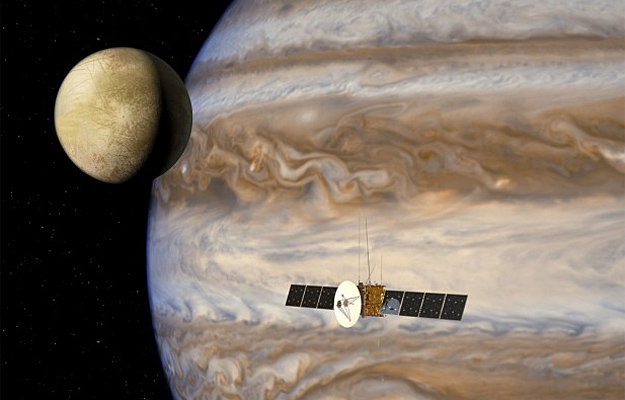 Participation in this PEA will be open to all categories of organizations (foreign and domestic, with the exception that European Principle Investigators must submit their proposals to a separate Announcement of Opportunity to be released by ESA), including educational institutions, industry, not-for-profit organizations, Federally Funded Research and Development Centers (FFRDC’s), NASA Centers, the Jet Propulsion Laboratory (JPL), and other Government agencies. Principal Investigators are responsible for and allowed to assemble the instrument team from any and all of these organizations.

The target launch date for the JUICE mission is June 2022. The mission is described in detail in the ESA Science Management Plan and the ESA Yellow Book, which will become available at http://sci.esa.int/juice and will be linked from the JUICE Acquisition Library when the PEA is released.

The scientific objectives of the JUICE mission are:

1) Study Ganymede as a planetary object, including its potential habitability;
2) Explore Europa,s recently active zones;
3) Study Callisto as a remnant of the early Jovian System;
4) Explore the Jupiter System as an archetype for gas giants

The total payload resources including mass, power, and data for the instrument complement will be described in a document in the JUICE Acquisition Library.

This expanded version of the Federal Business Opportunities (FBO) notice will be available until the date of release of the AO. Note that the JUICE PEA may contain provisions that differ from this notice, in which case those in the PEA will take precedence. Questions or comments about this intention to release a JUICE PEA may be addressed to the Jupiter Icy Moon Orbiter Scientist: Dr. Curt Niebur, Science Mission Directorate (SMD), National Aeronautics and Space Administration, Washington, DC 20546-0001; E-mail: [email protected]; the character string “JUICE PEA” (without quotes) should be included in the subject line of all transmissions. Telephone: (202) 358-0390.

Important characteristics of this intended PEA are expected to be:

* NASA has allocated $100 Million RY budget over the full life cycle of the mission for a limited portion of the JUICE payload consisting of the three types of contributions described above.

* Pending the submission of an adequate number of proposals of merit, NASA expects to select programmatically balanced U.S. contributions of the three types described above, including approximately two instruments that address the JUICE science objectives.

* Proposals submitted in response to this intended PEA will undergo standard NASA evaluation by two independent panels: one to evaluate science merit and feasibility of the science investigation and one to evaluate feasibility of the implementation approach, including cost (Technical, Management, and Cost Review Panel). NASA will also evaluate U.S. contributions contained in any proposal submitted in response to the ESA AO. NASA will share these review results with the ESA Proposal Review Committee for their consideration.

* All proposals submitted in response to this PEA will be provided by NASA to ESA and undergo the ESA review process described in the ESA Science Management Plan. All ESA reviewers will sign a nondisclosure agreement.

* Proposers responding to this PEA must indicate any ITAR sensitive material in their proposals.

* ESA will share with NASA the results of its review for proposals containing NASA contributions. However, NASA retains selection authority for U.S. contributions.

* NASA welcomes contributions from non-U.S. institutions on proposals with a U.S. PI provided that they are offered on a no-exchange-of-funds basis, comply with current U.S. restrictions concerning the export of technology, and do not exceed one-third (1/3) of the proposed PI-Managed Mission Cost.

* Data from JUICE investigations must be made fully public through the Planetary Data System (PDS) in a usable form, as soon as practical but no more than six months after acquisition. All data products shall be documented, validated, and calibrated in physical units usable by the scientific community at large.

* All proposals will be required to include in their overall planning both funding and commitment to NASA’s Education and Public Outreach (EPO), and Small Disadvantaged Business Programs (details of these plans will be required in Phase A/B if selected).

The following schedule describes the anticipated major milestones of the JUICE PEA. These dates may change.