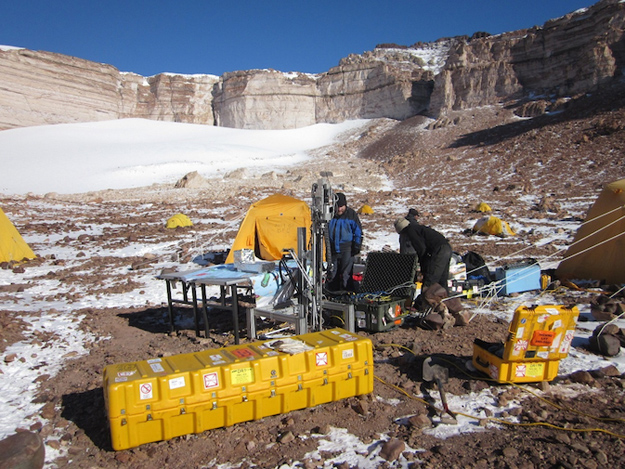 Students from schools across North America recently participated in a real NASA Mars mission, called Icebreaker. From their classroom, they remotely operated a robotic arm that transferred soil samples into a hopper on a Phoenix-sized mockup spacecraft located in the Antarctic. Designed and built at NASA’s Ames Research Center, Moffett Field, Calif., the robotic arm and its automation and control software is being tested as part of a mission that drills into the icy subsurface of Mars.

NASA has an education goal to inspire and engage students in science, technology, engineering and mathematics (STEM) content. To meet that goal, Ames scientists brought the virtual experience of science exploration into the classroom from the McMurdo Research Station in the Dry Valleys of the Antarctic.

“Involving students is a great way to test our drill. If anyone can break this drill, it’s enthusiastic kids operating the controls. There is additional benefit that we might also be inspiring the next generation of space explorers,” said Chris McKay, an Ames planetary research scientist and the principal investigator of the Icebreaker mission.

Scientists momentarily residing in one of the most frigid regions on Earth talked to students in classrooms live through video. Discussions included project descriptions and activity briefings followed by a question and answer session.

IceBreaker is a rotary-percussive drill that rotates and hammers on its target to deliver specimen samples to the surface for scientific analysis. As part of the 2010 Discovery proposal, scientists thought it was capable of drilling as deep as three feet into ice and frozen soil. However, test demonstrations show it is capable of penetrating up to 15 feet. Once samples have been elevated to the surface by the drilling, the robotic arm transfers the drill specimens to the instrument inlet hoppers on the spacecraft.

The robotic arm and its automation and control software is being tested by NASA Ames for a possible Mars mission in 2018 or 2020. Because Antartica and Mars share similar environmental conditions, such as dryness and freezing temperatures, it is an ideal testing location for the Icebreaker drill.

The science activity in early January provided an opportunity for the students, their teachers, and school volunteers to learn about sustaining life on Mars. Students were enthusiastic and awe-inspired by the sophisticated technology.

“It was awesome,” said Carlos Granades, a student from Jackson Elementary, Pasadena, Calif. “It makes me feel proud.”