NOAA’s DSCOVR going to a ‘far out’ orbit 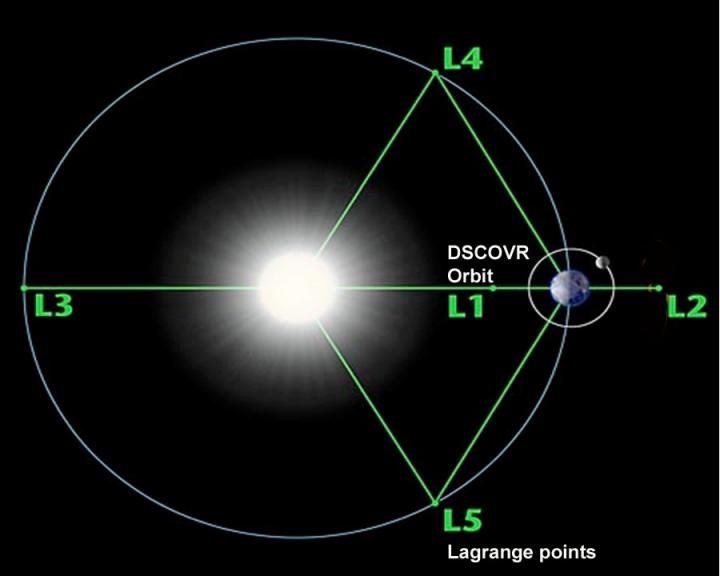 The Deep Space Climate Observatory, or DSCOVR, spacecraft will orbit between Earth and the sun, observing and providing advanced warning of extreme emissions of particles and magnetic fields from the sun known as Coronal Mass Ejections or CMEs which can affect power grids, communications systems, and satellites close to Earth. DSCOVR will also observe our planet and provide measurements of the radiation reflected and emitted by Earth and multi-spectral images of the sunlit side of Earth for science applications.

DSCOVR’s orbit will be at what is called the L1 point in space. L1 means the Lagrange point 1 which is approximately one million miles from Earth. Once launched, it will take approximately 110 days to arrive at its orbit.

At L1, the gravitational forces between the sun and Earth balance the centrifugal forces of a satellite to provide a quasi-stable orbit point requiring fewer orbital corrections (and therefore reducing fuel consumption) for the spacecraft to remain in its operational location for a longer period of time. Placing DSCOVR in orbit around the L1 point provides definite advantages, including the quality of the solar wind observations.

The L1 position will provide DSCOVR with a point of “early warning” when a surge of particles and magnetic field from the sun will hit Earth, if they have characteristics that will cause a geomagnetic storm for Earth. Unlike other satellite orbits that circle around Earth, spacecraft at L1 can always stay on the sunward side of our planet making it an ideal location for monitoring incoming solar wind. The amount of early warning ranges from approximately 45 to 30 minutes depending on the speed of the coronal ejected particles, but nonetheless, a sufficient amount of time for spacecraft and power grid operators to take appropriate actions to protect the systems from catastrophic failure.

The DSCOVR Earth science Instruments will be the very first looking at the Earth from the L1 point and will observe the whole sunlit Earth from sunrise to sunset (compared with a microscopic view from low orbits).

Other NASA satellites have used the L1 position for orbit, but this is the first time a NOAA satellite will orbit in L1. Previous NASA missions include: ISEE 3 launched in 1978, and ACE, Wind and SOHO currently in the L1 orbit.

The DSCOVR mission is a partnership between NOAA, NASA and the U.S. Air Force. NOAA will operate DSCOVR from its NOAA Satellite Operations Facility in Suitland, Maryland, process data at the SWPC for distribution to users within the United States and around the world. The data will be archived at NOAA’s National Geophysical Data Center in Boulder, Colorado.

NASA received funding from NOAA to refurbish the DSCOVR spacecraft and its solar wind instruments, develop the ground segment and manage launch and activation of the satellite. The Air Force funds and oversees the launch services for DSCOVR. DSCOVR also hosts NASA-funded secondary sensors for Earth and space science observations. NASA provided funding for the refurbishment of the Earth-viewing instruments. The Earth science data will be processed at NASA’s DSCOVR Science Operations Center and archived and distributed by NASA’s Atmospheric Science Data Center.

For more information about DSCOVR, visit: