By SpaceRef Editor
August 14, 2007
Filed under exploration, NEEMO, US

Today was the second day of lunar spacewalks and our first day of lunar construction. We started the day by deploying a mock solar array module and quickly followed up with final assembly of the Luna Sea tower. As we have learned our way around the work area and gotten used to our gear, we have gotten much more efficient in terms of what we can accomplish in a day. We took a few minutes admiring our tower before disassembling it and carting it back to Aquarius. While we were taking pictures, someone else showed up to admire our work as well! 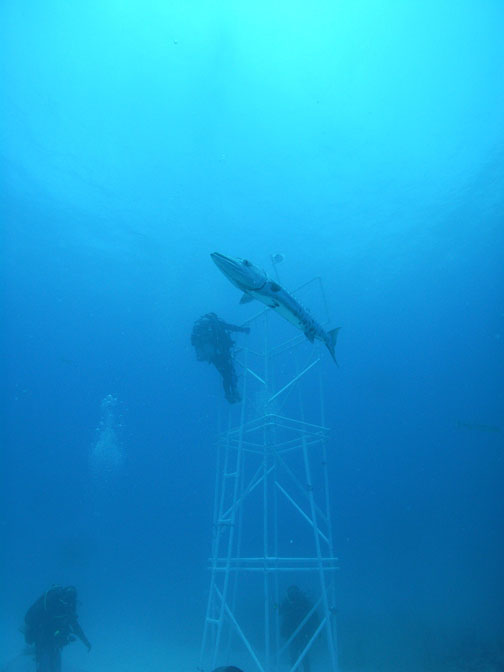 Construction in extreme environments is something we have been doing on the International Space Station for more than seven years. NASA has also flown the space shuttle on nearly 120 missions spanning more than 20 years. So while we have considerable experience working in weightlessness, we have hardly any experience building things in lunar or Martian gravity. Our work here on Aquarius is helping NASA develop the tools, techniques and even the vehicles that will help us build the first human outposts on the moon and Mars. Just like the final Apollo missions, NEEMO 13 has been fortunate not to have to walk everywhere. Today was the first day we used our rover, which really came in handy when it came time to move the three large modules of our tower out to the construction site. Building an outpost on the moon will likely require this “moving truck” capability, since each lunar lander that brings more supplies will not want to land too close to an existing outpost. Our rover with a trailer is one way to do this, and it was a very unique experience driving across the floor of the ocean! It’s likely that we had almost as much fun as the astronauts of Apollo. Satoshi will have to ask Dr. Jack Schmitt someday! – Written by the Aquanaut Crew

Satoshi on the rover