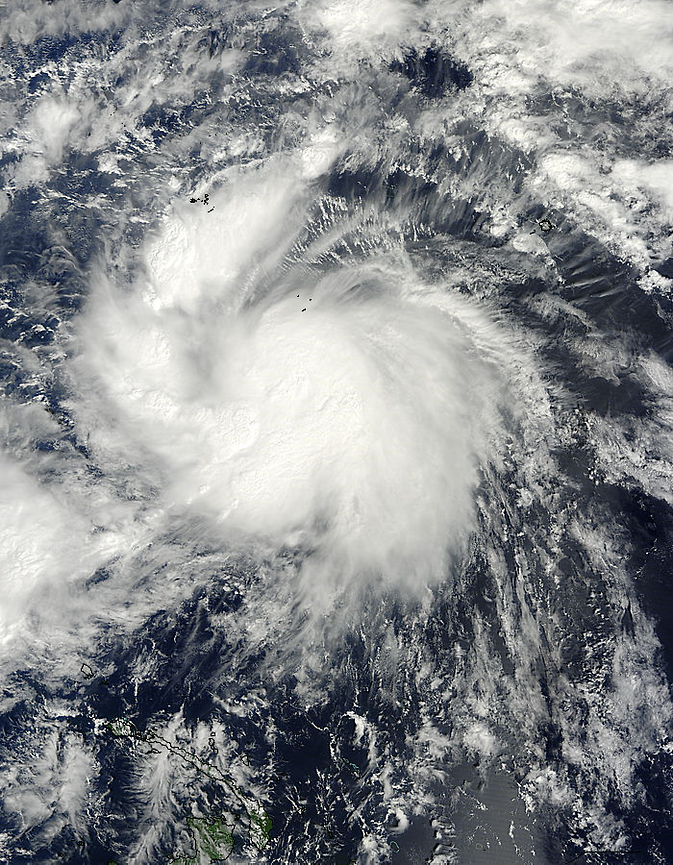 The Moderate Resolution Imaging Radiometer known as the MODIS instrument that flies aboard NASA’s Terra satellite captured a visible image of Tropical Storm Hagupit in the western Pacific Ocean on Dec. 1 at 00:05 UTC (7:05 p.m. EST, Nov. 30). The picture showed a concentration of strong thunderstorms around the center of circulation and fragmented bands of thunderstorms spiraling into the center from the western quadrant.

Hagupit developed from low pressure area System 95W. On Nov. 30, the Joint Typhoon Warning Center (JTWC) was monitoring System 95W when it was a couple of hundred miles south of the island of Chuuk. Chuuk is an island and one of the four states of the Federated States of Micronesia, located in the western North Pacific Ocean.

By Dec. 1 at 0900 UTC (4 a.m. EST), the low pressure area had been designated as a tropical depression and was renamed Tropical Depression 22W. Six hours later, the storm had quickly intensified into Tropical Storm Hagupit as maximum sustained winds strengthened near 40 knots (46 mph/73 kph). At that time Hagupit was centered about 140 nautical miles south-southwest of Chuuk and was moving toward the west-northwest at 15 knots (17.2 mph/27.7 kph).

The Joint Typhoon Warning Center noted that animated infrared satellite imagery on Dec. 1 confirmed the low-level circulation center was consolidating and fragmented bands of thunderstorms were wrapping into the low-level center. The Atmospheric Infrared Sounder or AIRS instrument aboard NASA’s Aqua satellite captured infrared data on the storm on Dec. 1 at 02:59 UTC (Nov. 30 at 9:59 p.m. EST). The AIRS data showed strong thunderstorms with cloud top temperatures exceeding -63F/-53C around the center, which indicated the storms were high in the troposphere and capable of generating heavy rainfall.

The forecast from JTWC calls for slow intensification of the tropical storm over the next day. Thereafter, the storm is expected to intensify rapidly because of improved upper-level atmospheric conditions and warm sea surface temperatures. The JTWC is forecasting Hagupit as a typhoon as its center passes just to the north of the island of Yap on Dec. 3 while continuing to move in a west-northwesterly direction.