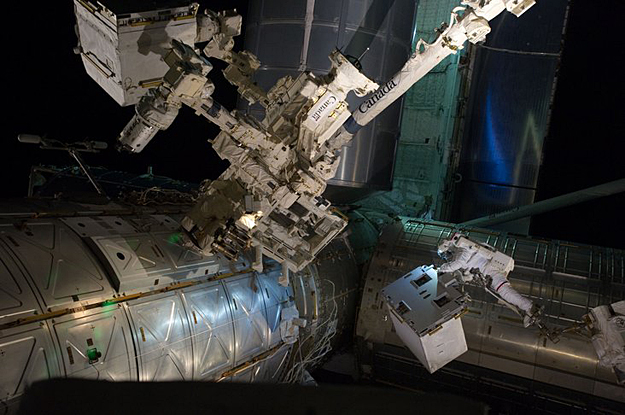 In mid-January, NASA will take the next step in advancing robotic satellite-servicing technologies as it tests the Robotic Refueling Mission, or RRM aboard the International Space Station. The investigation may one day substantially impact the many satellites that deliver products Americans rely upon daily, such as weather reports, cell phones and television news.

During five days of operations, controllers from NASA and the Canadian Space Agency will use the space station’s remotely operated Special Purpose Dexterous Manipulator, or Dextre, robot to simulate robotic refueling in space. Operating a space-based robotic arm from the ground is a feat on its own, but NASA will do more than just robotics work as controllers remotely snip wires, unscrew caps and transfer simulated fuel. The team also will demonstrate tools, technologies and techniques that could one day make satellites in space greener, more robust and more capable of delivering essential services to people on Earth.

Why Fix or Refuel a Satellite?

“Every satellite has a lifespan and eventual retirement date, determined by the reliability of its components and how much fuel it can carry,” explains Benjamin Reed, deputy project manager of NASA’s Satellite Servicing Capabilities Office, or SSCO.

Repairing and refueling satellites already in place, Reed asserts, can be far less expensive than building and launching entirely new spacecraft, potentially saving millions, even billions of dollars and many years of work.

The RRM demonstration specifically tests what it would take to repair and refuel satellites traveling the busy space highway of geosynchronous Earth orbit, or GEO. Located about 22,000 miles above Earth, this orbital path is home to more than 400 satellites, many of which beam communications, television and weather data to customers worldwide.

How RRM Is Making a Difference

Built by SSCO in the span of 18 months, the washing-machine-sized RRM module contains the components, activity boards and tools to practice several of the tasks that would be performed in orbit during a real servicing mission. Launched to the space station on July 8, 2011, aboard the final mission of the Space Shuttle Program, RRM was the last payload an astronaut ever removed from a shuttle.

In 2012, RRM demonstrated dexterous robotic operations in space. Dextre’s 12-foot arm and accompanying RRM tool successfully snipped two twisted wires — each the thickness of two sheets of paper — with only a few millimeters of clearance: a task essential to the satellite refueling process.

The RRM refueling demonstration on Jan. 14-24 will employ the Canadian-built Dextre, NASA’s RRM module and four unique RRM tools to show that space robots controlled from Earth — hundreds or even thousands of miles below — can transfer fuel to satellites with triple-sealed valves that were never designed to be accessed.

“The RRM operations team is very excited about the upcoming refueling demonstration,” says Charlie Bacon, RRM operations manager. “Over the last two years, the team has put in more than 300 hours of preparation — reviewing procedures, running simulations, and communicating with team members from other NASA centers and our international partners. When we finally execute the namesake task of RRM, we anticipate that our work will culminate in proving that in-orbit satellite refueling is no longer future technology — it’s current technology.”

Although the RRM module will never fix or refuel a satellite itself, its advanced tools and practice runs are laying the foundation for future in-orbit robotic servicing missions. Additional RRM demonstrations will continue into 2013, with a new round of servicing task boards, tools and activities slated to continue its investigations through 2015.

What’s Next in Robotic Satellite Servicing?

The satellite-servicing concept that RRM is advancing is one that NASA has been developing for years. Beginning with the Solar Maximum repair mission in 1984, the servicing philosophy paved the way for five successful astronaut-based missions to upgrade and repair the Hubble Space Telescope and has been practiced more recently in spacewalks to assemble and maintain the space station.

With the RRM on the space station and a robust technology development campaign being conducted on the ground, NASA is testing capabilities for a new robotic servicing frontier. Since 2009, the Satellite Servicing Capabilities Office at NASA’s Goddard Space Flight Center in Greenbelt, Md., has been aggressively advancing the robotic technologies for a free-flying servicer spacecraft that could access, repair and refuel satellites in GEO.

To this end, the SSCO team has been studying a conceptual servicing mission and building technologies to address uncharted territory such as autonomous rendezvous and docking, propellant transfer systems for zero gravity and specialized algorithms (computer commands) to orchestrate and synchronize satellite-servicing operations. A systems engineering review on this conceptual mission was recently conducted with positive responses from peer experts and external participants.

Reed and the SSCO team see many applications across NASA for these new, game-changing capabilities.

“The technologies we’re building to help rescue satellites in five years could be the very same ones used to clean up space ten years in the future or save a spacecraft on the way to Mars 30 years from now,” says Reed. “NASA is acting today to ensure that we have the capabilities America needs for the future. With satellite servicing technologies, we’re bolstering the agency’s long-term strategy as we invest in near-term tactical technology investments. RRM is just the beginning.”