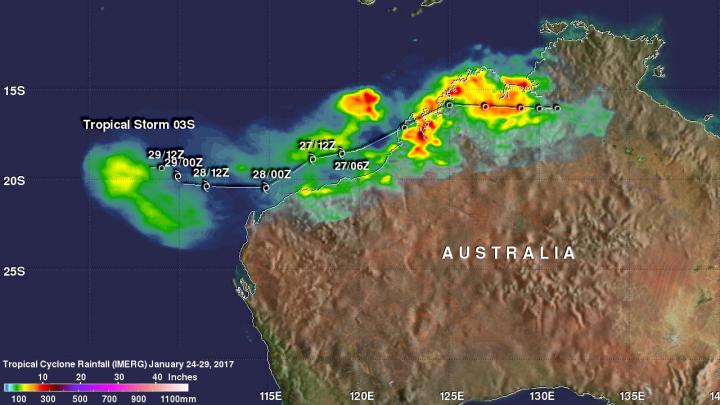 NASA’s IMERG product was used to calculate the amount of rainfall generated by Ex-tropical Cyclone 03S. By January 30, the former tropical cyclone was a remnant low pressure area in the Southern Indian Ocean.

Integrated Multi-satellitE Retrievals for GPM (IMERG) data were used to show rainfall that fell near tropical cyclone 03S. The highest rainfall totals were found by IMERG as the parent low pressure center moved over northwestern Australia during the period from January 24 to 26, 2017. GPM is the Global Precipitation Measurement mission core satellite. GPM is a joint mission between NASA and the Japanese space agency JAXA.

Tropical cyclone 03S formed from the low only after moving into the warm waters of the Indian Ocean on January 27, 2017. IMERG data were used to analyze rainfall that occurred near the parent low and tropical cyclone 03S’ centers of circulation. Rainfall totals of close to 300 mm (11.8 inches) were estimated along Australia’s northwest coast.