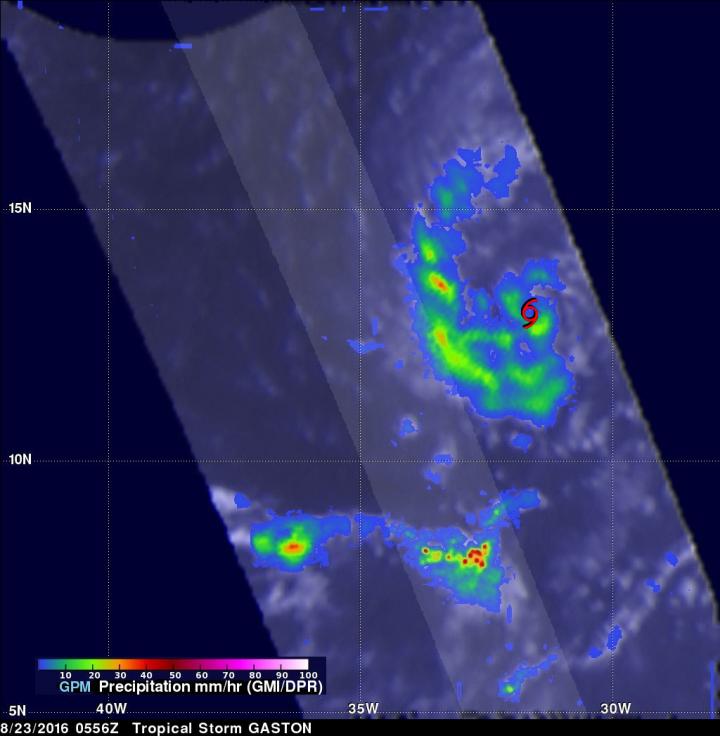 The Global Precipitation Measurement mission or GPM core satellite provided scientists with a look at rainfall rates and cloud heights within Tropical Storm Gaston as it continued to intensify in the Atlantic Ocean.

The GPM core observatory satellite had a very good view of forming tropical storm Gaston on Aug. 22 at 2:26 p.m. EDT (1826 UTC). At that time the forming tropical storm was starting to get organized with bands of showers moving around the center of the low’s circulation. The GPM satellite had a fairly good view when it flew over newly formed Tropical Storm Gaston on Aug. 23 at 1:56 a.m. EDT (0556 UTC).

Measurements of precipitation with Gaston were derived from GPM’s Microwave Imager (GMI) and Dual-Frequency Precipitation Radar (DPR) instruments. The GPM satellite had the best examination of rainfall around the tropical cyclone when it flew over the low’s center on Aug. 22. The heaviest precipitation was found by GPM in an area of intense convective storms located well to the southwest of the low. DPR measured rain there falling at a rate of over 141 mm (5.6 inches) per hour.

GPM’s Radar (DPR Ku Band) made measurements of the intensity of rainfall and heights of storms near the developing tropical storm. 3-D measurements by DPR found that some storm tops around the developing tropical storm were reaching altitudes above 14.7 km (9.1 miles). GPM is a joint mission between NASA and the Japan Aerospace Exploration Agency.

At 5 a.m. EDT (0900 UTC) on Aug. 24 the center of Tropical Storm Gaston was located 14.9 degrees north latitude and 38.6 degrees west longitude. That’s about 975 miles (1,570 km) west of the Cape Verde Islands. The National Hurricane Center said that Gaston is moving toward the west-northwest near 17 mph. A turn toward the northwest is expected later today.

Maximum sustained winds have increased to near 70 mph (110 kph) with higher gusts. Additional strengthening is forecast during the next day or so.

The National Hurricane Center (NHC) discussion noted that microwave imagery showed Gaston’s structure has improved since the passage of the GPM core satellite. Gaston has developed a well-defined low-level cloud ring and a mid-level microwave eye. However, Gaston’s mid-level center is displaced about 25 nautical miles to the northeast of the low-level center. The University of Wisconsin CIMSS (wind) shear analyses indicated that 10 knots of southwesterly wind shear is affecting Gaston, which could explain the cyclone’s tilted structure. The wind shear is expected to remain low enough during the next 24 hours to allow Gaston to strengthen to a hurricane later today.